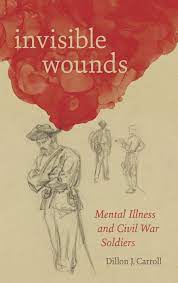 Dillon Carroll is an Instructor at Butte Community College. This interview is based on his new book, Invisible Wounds: Mental Illness and Civil War Soldiers (LSU Press, 2021).

JF: What led you to write Invisible Wounds?

DC: I’ve always been attracted to the dark underbelly of history. I had just read Eric T. Dean, Jr.’s book Shook Over Hell: Posttraumatic Stress, Vietnam and the Civil War, in which Dean, Jr., compared Vietnam veterans with Civil War veterans, and argued that Civil War veterans may have been afflicted with PTSD. I was reading through the published letters of an Alabama Confederate soldier named James Williams, and after the Battle of Shiloh, he wrote his wife: “I’ve had great and exciting times at night with my dreams since the battle,” he wrote home, “some of them are tragedies and frighten me more than ever the fight did when I was awake.” I nearly fell out of my seat after reading that, and I was interested in exploring psychiatric and emotional wounds in Civil War soldiers ever since. I thought there was a lot to explore and uncover still. Shook Over Hell mostly focused on Indiana soldiers, I thought a more national study might be interesting. Moreover, Shook Over Hell focused on white Union soldiers, and I thought exploring Black Union soldiers would be an enlightening comparison. Finally, I was interested in how these men coped. Obviously, many if not most of them came home and were able to transition into becoming healthy and productive civilians. I was curious how so many managed to do so. I was also interested in how Americans—doctors, family members, and the soldiers themselves—thought about mental illness during and after the Civil War.

JF: In 2 sentences, what is the argument of Invisible Wounds?

DC: Invisible Wounds argues that psychological and emotional wounds were just as much a part of the Civil War experience as illness or amputation, but the experience was varied, with some white soldiers able to cope with the trauma of war, and many Black soldiers finding service in the war as a balms for the trauma of slavery. In the postwar landscape, some Civil War veterans manifested disturbing and self-destructive behavior, and asylum superintendents, the families of veterans, and nascent neurologists all debated what caused the postwar problems of Civil War veterans: their own personal failings, the war, or nerve damage or irritation.

JF: Why do we need to read Invisible Wounds?

DC: The American Civil War is perhaps the nation’s most written about and read conflict, and many Americans experience the war as somewhat of a sanitized story, whitewashed of its ugly truths. To the extent that Americans are familiar with the damage of the war, it is amputations in the conflict, or Sherman’s destructive March to the Sea.

Invisible Wounds introduces readers to the reality that psychiatric and emotional injuries were just as much a part of the war as illness or amputation. The experience of soldiering in the war—harsh military discipline, poor rations, illness and disease, hard marches, the horror of combat—was traumatizing for Union and Confederate soldiers. Invisible Wounds argues that psychological and emotional wounds were just as much a legacy of the Civil War as physical wounds. Hopefully, readers come away from reading Invisible Wounds with a greater understanding of the psychic and emotional consequences of warfare and understand that war is obviously destructive work, but also can be self-destructive as well.

I also hope readers come away from reading Invisible Wounds with a greater understanding of the nuance and complexity of psychic injuries in the American Civil War. I argue that Civil War soldiers were not hapless victims of psychological wounds, and instead were agents in their own recovery, practicing a variety of coping mechanisms to successfully deal with the trauma of war. Moreover, Black soldiers, I argue, found soldiering in the war to be a balm for the trauma of slavery, as striking back at slaveholders on the battlefield could almost be curative in a sense.

DC: History and storytelling always interested me from a young age. I think I got that interest, in part, from my mom, who is a history buff and an amateur genealogist. I liked history as a kid because history was filled with interesting stories that were true, unlike fictional stories I also read, which were products of the minds of the writers themselves. In college, at California State University, Chico, I majored in history, but it was not until late in college that I took a course on the American Civil War and Reconstruction, which blew me away. I was hooked almost immediately. I wasn’t quite sure what I wanted to do with my life, so I went to graduate school, working on a Master’s Degree at Chico State, where I continued to study the Civil War. While in grad school at Chico, I read Stephen Berry’s book All That Makes a Man, which I absolutely loved. My then advisor, Dr. Robert Tinkler, introduced me to Dr. Stephen Berry, who taught at the University of Georgia, and was giving a talk at Chico. We had lunch, and Dr. Berry graciously offered to read drafts of my Master’s Thesis. When I finished, he invited me to apply to the PhD program at the University of Georgia, which I did, and was accepted. I studied at Georgia for several years, under the tutelage of Dr. Berry. In 2013, I moved to New York City, in part following my then girlfriend, now wife, and taught at Hunter College and St. Francis College. I received my PhD degree in 2016, and in 2018, we moved back to California and the next year I was hired by Butte College, a community college in Northern California.

DC: Honestly, I have not given much thought yet about what project might be next. Teaching full time, working on Invisible Wounds, and trying to have somewhat of a life, has left me very little bandwidth to think about a future project. I’m also looking forward to a short break from having the constant hum of a research project in the background of my life. I will pick something up shortly, I’m sure.