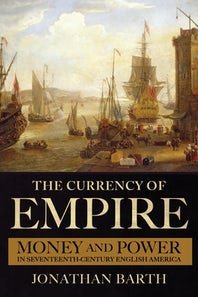 Jonathan Barth is Assistant Professor of History at Arizona State University. This interview is based on his new book, The Currency of Empire: Money and Power in Seventeenth-Century English America (Cornell University Press, 2021).

JF: What led you to write The Currency of Empire?

JB: After the 2008 financial crisis, my interest in the history of money and banking skyrocketed. Being an American historian, I naturally gravitated to the history of American finance and currency. My studies took me all the way back to the colonial period. I found that issues relating to money and finance were every bit as contentious and important to early Americans as they are to Americans today – indeed more so.

JF: In two sentences, what is the argument of The Currency of Empire?

JB: Money and fiscal policy were at the forefront of the development of Britain’s empire in North America in the first one hundred years of colonization. Questions over the control of money provoked many of the most significant conflicts between England and colonial America in the seventeenth century, foreshadowing the later American Revolution.

JF: Why do we need to read The Currency of Empire?

JB: For one, if you’re interested in the foundations of what eventually became the United States, this book offers a perspective – the politics of currency – that you’ve almost certainly never encountered. This book retells the first one hundred years of colonial America, but through a lens of currency. You’ll find that questions of money and economics are inextricably tied to politics and state development.

Second, I am firmly convicted that in order to understand money in our present age, we must understand money in the past. One of the goals of this book is to pioneer a new way for researching and writing monetary history: one that accounts for the political, social, and cultural landscape in which money circulates, and one that explains the subject of currency without resorting to unnecessary jargon or mathematical equations. For too long, in my view, the subjects of currency and finance have fallen under the exclusive purview of professional economists, leaving much of the work in the field chiefly quantitative and by and large unintelligible to the general public. Economists have many valuable things to contribute to this subject, of course, but scholars in the humanities contribute a more qualitative context to the study of economic and monetary history, presenting the subject in ways that allow the educated lay public to grasp its relevance and significance more readily.

JB: I had a phenomenal AP US History teacher in high school who cemented my interest. Never underestimate the power of a gifted teacher.

JB: The Currency of Empire (my first book) ends after the 1690s. For my second book, I intend to proceed forward in American monetary history. It will be a sequel of sorts to the first book. It will chronicle and analyze the plethora of paper monies in British colonial America in the eighteenth century. The first colonial paper money appeared in Massachusetts in 1690; within a couple decades, nearly all of the colonies issued paper money. By the 1720s and 1730s, this development had greatly irritated British imperial officials, who proceeded to crack down on the practice. This in turn sparked significant resentment and even resistance from a wide spectrum of the colonial public, who viewed the measures from the Crown and Parliament against paper money to be unjust and even oppressive. I’ll argue in this next project that paper currency was the most contentious public policy issue between Britain and the colonies before the Stamp Act crisis of 1765, and that these debates prepped and armed colonial thought leaders with useful rhetorical arguments against imperial control as the Revolution neared.