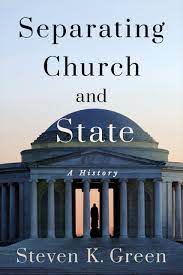 Steven K. Green is Fred H. Paulus Professor of Law and Director of the Center for Religion, Law and Democracy at Willamette University. This interview is based on his new book, Separating Church and State: A History (Cornell University Press, 2022).

JF: What led you to write Separating Church and State?

SG: Cornell University Press invited me to write Separating Church and State: A History, as part of its series on Religion and American Public Life.

JF: In 2 sentences, what is the argument of Separating Church and State?

SG: The book has two main theses: that the concept of separation of church and state has a longstanding pedigree, originating in Western Europe and being expanded upon in colonial America and then the United States; and that the understanding[s] of church-state separation have evolved over time, and that its protean nature helps to explain its controversy and longevity.

JF: Why do we need to read Separating Church and State?

SG: The idea of church-state separation has become increasingly controversial, particularly as a legal construct, with several Supreme Court justices openly disputing its value (e.g., in oral arguments on January 18 of this year, Justice Gorsuch referred to the “so-called separation of church and state”).  The book seeks to demonstrate the bona fides of the concept without entering into an ideological debate.

JF: Why and when did you become an America historian?

SG: I enrolled in my history graduate program (UNC) after four years of legal practice and received my PhD in 1997.

SG: I am writing a dual biography of Thomas Jefferson and James Madison on their contribution to religious freedom.