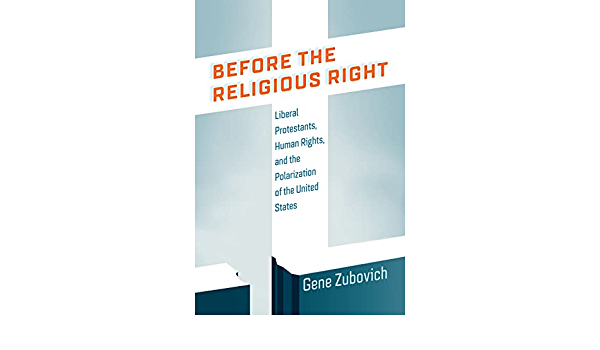 Gene Zubovich is Assistant Professor of History at the University of Buffalo. This interview is based on his new book, Before the Religious Right: Liberal Protestants, Human Rights, and the Polarization of the United States (University of Pennsylvania Press, 2022).

JF: What led you to write Before the Religious Right?

GZ: I wrote the book out of a recognition of how important liberal Protestantism was to US history and world history in the twentieth century. I grew up in the wake of the religious right and I was surprised to learn that liberal Protestants had played an important role in the New Deal, the fight against segregation, the creation of the United Nations, and the advent of human rights. Liberal Protestantism was an intellectually and politically vibrant religious world (and a deeply flawed one). It was also strikingly different from today’s religious landscape. As I learned more about liberal Protestants’ political mobilizations against racism and economic inequality from the 1920s to through the 1960s, I concluded that you could not separate their work in the United States from their international engagement. Their involvement in the transnational ecumenical movement, which brought Protestant and Orthodox denominations across national boundaries beginning in the early twentieth century, shaped their views and their politics. Liberal Protestants served as a bridge between international ideas about human rights and American liberal politics. They did so in an era historians typically describe as being dominated by “American exceptionalism.” And so, the book ultimately became a history of how international debates reshaped American politics and culture in the mid-twentieth century.

JF: In 2 sentences, what is the argument of Before the Religious Right?

JF: Why do we need to read Before the Religious Right?

GZ: One of the major themes of Before the Religious Right is the way that divisions within the liberal Protestant community paved the way for our contemporary political polarization. These divisions played out in several ways. One of the fault lines was between the clergy and the laity. Another was regional (think Southerners resisting desegregation). Other fights broke out about the Cold War. In all these cases, people who soured on the liberal Protestant leadership began to build bridges to the conservative movement and to likeminded evangelicals and Catholics. In the middle decades of the twentieth century we can see the emergence of recognizably “liberal” and “conservative” religious identities and the coalescing of the religious right. If you want to understand today’s political polarization, you should read Before the Religious Right.

GZ: I became a historian because I became an American. After I came to the US, I struggled to make sense of this country and I found that thinking through its history helped me understand it better. As it turned out, I was good at historical thinking. But I had a good deal of luck too. I had some great teachers and professors along the way. And as a poor kid growing up in San Francisco, it would have been impossible for me to become a historian if a top-notch public research university didn’t just happen to be a 20-minute subway ride away. The one thing I value most about being a historian is the power of narrative. If the study of history is narrating how our world came into being, then I hope Before the Religious Right helps us better understand the cultural and political landscape of the United States today.

GZ: I’m writing a global history of the US culture wars since the 1960s. My new project is tentatively titled, Culture Warriors Abroad: A Global History of the American Culture Wars. We often talk about the “culture wars” that the New Right inaugurated as a distinctly American phenomenon, rooted in domestic politics about segregation, school prayer, and abortion. I think that is part of the story but what gets lost is how much figures like Paul Weyrich, Judie Brown, Richard Vagurie, and Phyllis Schlafly cared about what happens overseas and how much time and effort they spent cultivating allies abroad. This is something that historians of Latin America, Africa, and Asia have long known. Leaning on their scholarship, I came to the conclusion that you really cannot understand the US culture wars—back then or today—without understanding its international dimensions.