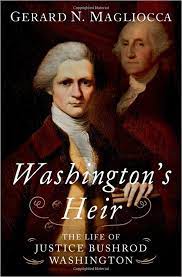 Gerard Magliocca is Samuel R. Rosen Professor of Law at Indiana University McKinney School of Law. This interview is based on his new book, Washington’s Heir: The Life of Justice Bushrod Washington (Oxford University Press, 2022).

JF: What led you to write Washington’s Heir?

GM: Nobody had ever published a book about Bushrod Washington. He was a pivotal member of the Supreme Court under Chief Justice John Marshall and his story is fascinating.

JF: In 2 sentences, what is the argument of Washington’s Heir?

JF: Why do we need to read Washington’s Heir?

GM: The book sheds new light on George Washington, John Marshall, and the history of enslaved people at Mount Vernon.

GM: I have loved history ever since I was a child. Once I became a law professor, I was able to combine my love for history with my legal work.

GM: My next project is about Justice Robert H. Jackson’s concurring opinion in The Steel Seizure Case, which is the most famous discussion of the constitutional boundaries between presidential and congressional power.