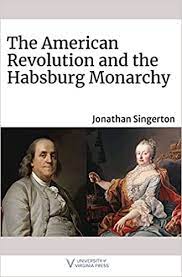 Jonathan Singerton is Lecturer of Global and Comparative Histories of Central Europe at the University of Innsbruck. This interview is based on his new book, The American Revolution and the Habsburg Monarchy (University of Virginia Press, 2022).

JF: What led you to write The American Revolution and the Habsburg Monarchy?

JS: The past is often most interesting when viewed differently or from an unfamiliar perspective. How did the American Revolution appear to contemporaries living under one of Europe’s oldest dynasties? This question became an obsession as I lived in Vienna many years ago and wandered its famous streets and perused its various coffee houses. The quest to find out prompted me to write a history of the American founding from a central European perspective and happily led me down a meandering path filled with characters more unforgettable than any of Vienna’s charming cobbled streets.

JF: In two sentences, what is the argument of The American Revolution and the Habsburg Monarchy?

JS: As a worldwide event with reverberations well beyond the Atlantic World, the American Revolution ultimately represented both an opportunity and a challenge to European states, including seemingly faraway ones such as the Habsburg Monarchy in the heart of Europe. The Habsburgs reacted to the American Revolution with guarded pragmatism, sensing economic prospects across the Atlantic but all the while exercising caution towards the political and ideological fallout caused by American independence.

JF: Why do we need to read The American Revolution and the Habsburg Monarchy?

JS: Why didn’t the War of Independence end with the Peace of Vienna in 1781 rather than the Peace of Paris in 1783? Why did Maria Theresa warn Marie Antoinette about the American Revolution? Why did her son, the Holy Roman Emperor, want to meet Benjamin Franklin for hot chocolate in Paris? Why did one Habsburg family member study the Pennsylvanian constitution? Why was the first American diplomat in Vienna blocked from court? Why did one Hungarian professor write a 700-page history of the United States? Why did the first Habsburg representative in North America seek to establish trade with Native Americans? Why did Thomas Jefferson ruin these plans? If readers want to know the answers to any of these questions—and many more—then they should pick up this book. The American Revolution and the Habsburg Monarchy offers you all a fundamentally novel take on America’s founding.

JS: I consider myself both a historian of the United States as well as the Habsburg lands. Today I primarily teach Habsburg history from a global perspective. Just last week I taught Innsbruck students about Archduke Franz Ferdinand’s tattoo and how an Austrian stole a bund of Maori mummies in New Zealand. Yet my interests always bring me back to North America in some way or another. I was fortunate to study under many gifted teachers who exuded enthusiasm for the past, particularly the eighteenth century. As one of the most influential events of that period, the American Revolution captured my attention from an early age with a cast of indelible characters like Abigail Adams, Joel Barlow, Benjamin Franklin, and Phillis Wheatley. Habsburg history has a good crowd too, so I am always at home and endlessly fascinated.

JS: My second book, Beginning Her World Anew: The Many Lives of Maria von Born, is almost completed and tells the story of an Austrian countess who fled to the United States in the 1790s, lived out on the frontier, became an entrepreneur in Philadelphia, and eventually returned to post-war Vienna in 1815. I see her biographical example as another continuation of the myriad connections between early America and central Europe.

More recently, I’ve begun a new research project on the role of Austria-Hungary in shaping the religious life of the United States throughout the nineteenth century. It is often forgotten that the Leopoldine Society, a state missionary foundation ran out of Vienna, funded Catholic dioceses in North America with millions of dollars and flooded the American Midwest with hundreds of German-speaking missionaries. Contemporary Americans were certainly aware of Austria-Hungary’s meddling influence though and it almost led to war between the two nations on more than one occasion.

Finally, I hope to build upon my teaching by writing the first truly global history of the Habsburg lands.