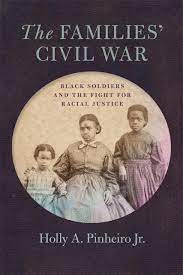 Holly A. Pinheiro Jr. is Assistant Professor of African American History at Furman University. This interview is based on his new book, The Families’ Civil War: Black Soldiers and the Fight for Racial Justice (University of Georgia Press, 2022).

JF: What led you to write The Families’ Civil War?

HP: I’ve always been passionate about telling the lived experiences of Black families connected to Civil War Era military service, partly due to my love for the film (Glory). Many conversations and depictions of military service often downplay or ignore how freeborn Black families supported Black soldiers and veterans well into the early-twentieth-century even though Black servicemembers, local community members, and politicians repeatedly stated otherwise.

JF: In 2 sentences, what is the argument of The Families’ Civil War?

HP: The book focuses on the persistence of northern freeborn Black families who constantly fight against racial discrimination, in and outside of the U.S. Army. It also explores how these families engaged in a multi-generational battle over the conflicted meaning(s) of the Civil War in the U.S.

JF: Why do we need to read The Families’ Civil War?

HP: I believe that this book will be of interest to numerous individuals that want to learn more about the important history of Black women who were critical to supporting the U.S. war effort and fighting against racism (in support of Black soldiers) decades after the war. Additionally, this book is about military families and their unending support for each other in ways that will still ring true for people today. Finally, understanding the lives of these Black Philadelphian families will inform current conversations about social and racial justice.

HP: My passion for history can be traced to my familial connections. My mother served for 25 years in the U.S. Navy, and her service heavily influenced my childhood experiences (particularly when she deployed overseas). Both of my uncles were also influential by having me reading the autobiographies of Malcolm X and Frederick Douglass when I was very young. One reason that I decided to become a historian was to uplift the lives of historically marginalized people and emphasize their historical significance to a wider audience. Secondly, I love being a historian in order to empower my students to achieve their goals–professional and personal–while also emphasizing that we must remember and honor the lived experiences of historical figures.

HP: I’ve already begun working on a monograph that’ll explore the lived experiences of all Pennsylvania-born USCT soldiers and their families who trained at Camp William Penn.