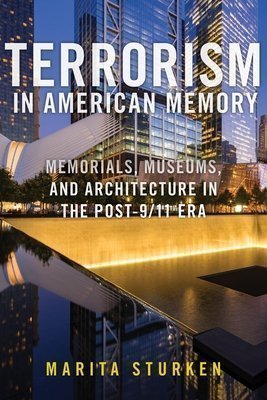 Marita Sturken is Professor of Media, Culture, and Communication at New York University Steinhardt. This interview is based on her new book, Terrorism in American Memory: Memorials, Museums, and Architecture in the Post-9/11 Era (NYU Press, 2022).

JF: What led you to write Terrorism in American Memory?

MS: I have been writing about the role of memory in the shaping of American national identity for quite some time (including my 2007 book Tourists of History: Memory, Kitsch, and Consumerism from Oklahoma City to Ground Zero) and over the last 10-12 years I kept getting pulled back to the topic of how 9/11 was being memorialized – the excess of memory of 9/11 and the crazy politics of it in New York in particular. I live not that far from Ground Zero, and so I watched the rebuilding of the site, the opening of the memorial and museum, and the construction of One World Trade Center and the WTC Transportation Hub (the Oculus) with increased dismay. It was not until the pandemic hit, and it became clear that the post-9/11 era had ended, that the full argument of the book came together, with the National Memorial for Peace and Justice in Montgomery, Alabama, forming a bookend to 9/11 memory and pointing to new forms of memory activism (and a new, as of yet undefined era) as opposed to the nationalistic memory of the post-9/11 era. While 9/11 memory allows the US to appear an innocent victim, the lynching memorial demands an acknowledgement of complicity and a reckoning with the nation’s guilt. The lynching memorial is a memorial to victims of racial terrorism within the United States, and so a primary aim of the book is to situate the history of terrorism in the US not simply as a force visited upon us from foreign entities, but as a key element of the history of the nation, now clearly evident in the rise of domestic terrorism in the form of insurrections.

JF: In 2 sentences, what is the argument of Terrorism in American Memory?

MS: This book argues that the post-9/11 era was shaped in many ways through the production of cultural memory—from 9/11 memory as a form of national unity to the contested memory of racial injustice that has dominated in the era’s end. Examining how we have memorialized 9/11, the post-9/11 wars in Iraq and Afghanistan, and the history of racial terrorism (in the form of lynching) over the last 20 years, and how that memorialization has been debated and fought over, is a window into the contested imaginary of the nation.

JF: Why do we need to read Terrorism in American Memory?

MS: Understanding the post-9/11 era, what shaped it and why it has now ended, is crucial to understanding the historical precipice on which we stand today, when American democracy is under unprecedented threat. 9/11 was not simply one day, as it is often narrated to be. It is the attacks and all that followed in their wake, two disastrous wars that killed hundreds of thousands in the Middle East, and destabilized the region further, and that killed thousands of US soldiers and permanently disabled large numbers of them. How we memorialize these conflicts, the stories we tell through memorials, museums, and through the architecture of renewal and rebuilding, is revealing of the national stories they tell, the disavowal in US culture of our actions as a nation, and how those actions, not some enemy, have made us less stable and less secure as a nation. The US response to 9/11 and the post-9/11 wars in Iraq and Afghanistan feed directly into the political divisiveness and rise of anti-democratic forces in the United States today.

MS: I am a scholar of American studies, memory studies, and visual culture, and my work often overlaps with the scholarship of American history. The questions I am asking, however, are less about history and more about how the production of memory (in memorials, museums, films, photographs, souvenirs, etc.) is a key element of US national identity and how it is shaped, negotiated, and fought over. My PhD training is actually interdisciplinary and I teach in a department that is broadly interdisciplinary. So for me, posing historical questions has often been about meta-historical questions. My first book, Tangled Memories: The Vietnam War, the AIDS Epidemic, and the Politics of Remembering, was about the politics of the cultural memory of the Vietnam War and the AIDS Epidemic in the 1980s and 1990s, and how it shaped notions about who was and who was not an American. It looks at memorials, films, photographs/video, commodities, even scientific images to get at the question of how the meaning of these two events shaped concepts of the nation. My interest in memory, which has continued since then, is largely about how shared memories, cultural memory (in the form of memorials, popular culture etc) interact with, shape, feed into, and sometimes contest historical narratives.

MS: My next book project is a history of amateur/personal photography in the United States, from Kodak to Polaroid to Instagram and the iPhone. With a longstanding interest in photography, I am analyzing the social forces that have shaped the kinds of photographs that we take in our personal lives, and the broader social implications of picture-taking. Some of this project is about the corporate histories that have shaped picture-taking. Kodak, for instance, was quite pedagogical not only in its advertising but also in its production of magazines (such as Kodakery) and manuals, which ultimately led to it promoting family pictures and “Kodak moments” – those orchestrated moments of social cohesion (birthdays, celebrations, family gatherings) that are meant to create a nostalgic memory album. Polaroid, though it was equally pedagogical in some ads (the ad for the new SX70 camera was basically a technical how-to documentary), sold photographs not as family devices but as means to stand out in a social setting, to be a popular person at a party, holding the image as it developed. Polaroid sold photos as parties, sex, and art, with sharing as its most important quality.

I am interested in tracing this history into the present-day context of personal photography, which is primarily shaped not only by the digital image but by the fact that the vast majority of the millions of images taken every day are from smart phone cameras and shared immediately (hence the legacy of Polaroid). Picture taking has been dramatically changed by the fact that people always have cameras with them because of the smart phone. Here it is not photographic companies that are aiming to shape photographic practices but tech companies designing phones as cameras and selling the idea of sharing photos as a primary act of selfhood. The way we take personal images today is so dramatically different than even two decades ago. I believe we need to have a deeper understanding of the broader social implications of how these technological devices and platforms have transformed everyday picture taking in the digital era, and to situate this contemporary context in relation to the history of amateur photography.