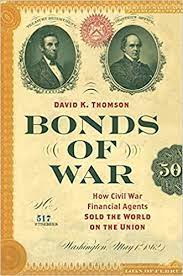 David K. Thomson is Assistant Professor of History at Sacred Heart University. This interview is based on his new book, Bonds of War: How Civil War Financial Agents Sold the World on the Union (University of North Carolina Press, 2022).

JF: What led you to write Bonds of War?

DT: Bonds of War really emerged as a result of an accidental archival find. I entered grad school with the intention of writing a dissertation on religion during the American Civil War. I wanted to specifically explore unconventional usage of providential discourse. Religion during the war is hardly a novel subject in the historiography, so I was always looking at possible alternatives. It was while reading through the correspondence of a minister that I came across a references to bond sales and a coordinated effort between the minister and a bond salesman. I went looking to see what was the extent of the historiography on the topic. In the context of the American Civil War, there was significant room for me to intervene in the literature. The more I looked, the more interested I became in the subject matter and believed I could offer a really interesting exploration of the topic that had not been addressed at length up to that point.

JF: In 2 sentences, what is the argument of Bonds of War?

DT: Bonds of War argues that the sale of bonds “won” the war for Union by fusing patriotism with the pursuit of profit. Not only did these bond sales fund the war’s operation, but it also facilitated international bond sales in large quantities largely centered around faith-based and kinship oriented networks that criss-crossed the Atlantic.

JF: Why do we need to read Bonds of War?

DT: Reading Bonds of War really helps to explore a deeply understudied part of the American Civil War. If one looked at newspapers from the Civil War, you would frequently find on the front page alongside battlefield reports and military updates the latest bond sales reports. Americans during the war cared deeply about the sales of these bonds and how it helped to fund the war effort– some $2.23 billion of bonds were sold during the war and covered nearly 75% of the cost of the war for the federal government. Yet, this is a topic that is often under-explored. This is a real shame, for debt and finance during the war is crucial to understanding the war, marketing, morale, and how 20th century wars leaned on the Civil War experience for inspiration. It’s also a story with compelling characters and not simply a story of numbers.

DT: I’ve had a deep love and passion for history since a very young age and specifically the Civil war era since an eighth grade report on the Battle of Gettysburg. While I’m relatively junior in my career as a professor– I take it as a real privilege to be able to talk about what I love for a living.

DT: My next project explores bonds further in the 19th century, but not at the federal level but rather state debt within the United States in the antebellum period. Specifically, I’m interested in the explosion of debt in the period prior to the Civil War by states (North and South) and the wave of default and repudiation that swept the nation in the 1840s and again in the Reconstruction era. This project is in its infancy, but I think will be a great addition to the larger narratives of finance, slavery, and native dispossession that defined the era.