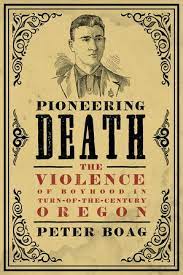 Peter Boag is Professor and Columbia Chair in the History of the American West at Washington State University. This interview is based on his new book, Pioneering Death: The Violence of Boyhood in Turn-of-the-Century Oregon (University of Washington Press, 2022).

JF: What led you to write Pioneering Death?

PB: I came across this gruesome story—an eighteen-year-old boy who murders his parents and a visiting neighbor on an Oregon farm in 1895—in the 1980s, when I was actually researching my dissertation. It so captivated me that I knew immediately that I one day had to write about it. It took some thirty-five years for that to happen. As it turned out, I needed that time and especially the last few years of national and world events to come to a full appreciation as to why that grim story haunted me as much as it did the community in which it happened.

JF: In 2 sentences, what is the argument of Pioneering Death?

PB: In searching for the motives as to why a youth would murder his parents—a shocking story that is more typically of interest to psychology and criminology than to history—I concluded that such an act simply cannot be separated from the larger history in which it occurs. And, as it turned out, that “history” is not just what happened, but how locals (and this applies across America) have taken considerable pain to construct their histories so as to elide the many painful violences on which their communities are founded.

JF: Why do we need to read Pioneering Death?

PB: This is forbidding story about murder and “justice,” childhood trauma and domestic violence, depression and unrelenting poverty, western settlement and genocide. It is a story about how all these have come to haunt the American landscape and the devastating consequences they have for a community and a society that willfully try to suppress their telling. It provides much needed warnings to those who today try to cover up the darkness of our collective past. Sadly, those people engaged in that cover up will likely not pick up this book.

PB: As a youngster western American history already captivated me. But it was in college, when I learned that I could make a living (so-called) from history, that I wanted to become a German historian. In graduate school, though, I found that the questions that American historians were asking, especially of the nineteenth century, were so fascinating that I was immediately drawn into them. The rest is history, as they say.

PB: I have two. I am working on the biography of a West Coast artist—a landscape painter—who worked between 1867 and 1915. But I am also working on a project that blends creative nonfiction and history and considers my family’s past in the context of world history and global migrations.