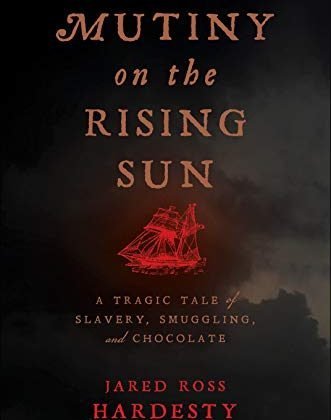 Jared Hardesty is Assistant Professor of History at Western Washington University. This interview is based on his new book, Mutiny on the Rising Sun: A Tragic Tale of Slavery, Smuggling, and Chocolate (NYU Press, 2021).

JF: What led you to write Mutiny on the Rising Sun?

JH: When I published my first book, Unfreedom: Slavery and Dependence in Eighteenth-Century Boston, the Old North Church and Historic Site in Boston invited me to give a talk. As it turned out, I discussed a man named Newark Jackson, a Boston ship captain, merchant, and chocolatier, in Unfreedom. Old North had named a historic chocolate shop after Jackson but knew little about him. Intrigued, I started to explore legal and probate records related to Jackson. In that initial research, I learned that Jackson had been murdered in a mutiny on board the schooner he commanded, the Rising Sun, in June 1743 shortly after completing a smuggling voyage to the Dutch colony of Suriname. This finding led the Old North Foundation to conduct a multi-year, multinational research project, funded by Mars-Wrigley Confectionary and the US National Park Service, to explore Newark Jackson and his world. I was the principal investigator for that research project, hiring an international team of researchers and creating an archive of our findings. The book, then, is a narrative of what we found, which was a transatlantic chocolate smuggling network that exchanged New England produce and captive Africans for cacao (see the epilogue of the book for more).

JF: In 2 sentences, what is the argument of Mutiny on the Rising Sun?

JH: Mutiny on the Rising Sun uses a 1743 mutiny to write a “human history of smuggling” that illustrates the place of illicit trade in the lives of people in early America and across the Atlantic world. It ultimately demonstrates how illegal trade created demand for exotic products like chocolate, and how slavery and smuggling were integral to the development of American capitalism.

JF: Why do we need to read Mutiny on the Rising Sun?

JH: There are two reasons: to understand significance of smuggling in the eighteenth-century American colonies and for better comprehending the legacies of illicit trade in the twenty-first century. First, not only does the book illustrate the centrality of smuggling and slavery to early American society and their connection to the rise of capitalism in what became the United States, but it also illuminates the different moral standards for those who lived in the eighteenth century versus today. The men at the center of the smuggling ring, despite being involved in illicit trade, owning enslaved people, and buying and selling African captives, were considered to be upstanding and contributing members of their community. Second, given how much of the Atlantic economy revolved around smuggling, especially the illicit side of the business of slavery (illegal slave trading and smuggling slave-produced commodities), you can see the impact of that smuggling today. In a place like Boston, for example, family fortunes, institutional endowments, and the physical landscape have all been shaped by the proceeds of smuggling.

JF: Tell us a bit more about the sources that you used to write Mutiny on the Rising Sun.

JH: The book draws from source material generated all around the Atlantic following the mutiny. Dutch authorities in Suriname interrogated two of the mutineers, leaving a rich record of their trial. The Dutch also carefully documented how the mutiny ended and the fate of the schooner and her cargo, including fifteen enslaved Africans. Moreover, documents, such as probate records, commercial correspondence, account books, and newspapers from Britain and its American colonies, provide a significant amount of detail about the case, especially its repercussions. All told, the mutiny on the Rising Sun generated manuscript evidence in New England, Barbados, Suriname, the Netherlands, and Great Britain all while garnering significant attention in print. This transnational archive provides intimate details of the Rising Sun and its world, allowing me to tell this human history of smuggling, follow a cast of characters across the middle decades of the eighteenth century, and reveal a world obscured by the intentionally enigmatic nature of smuggling.

JH: Currently, I am examining the lives of two brothers, Thomas and Cornelius Durant, who were merchants from Boston, but who settled on the Danish Island of St. Croix in the 1760s. There, they became plantation owners, slave traders, active members of St. Croix’s large Anglophone community, and ardent patriots during the American War of Independence. The experiences of the brothers Durant illustrate that revolutionary and republican sentiment was just as often cultivated abroad as it was at home and deeply influenced by involvement in slavery and the slave trade.