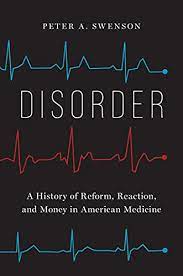 Peter Swenson is Charlotte Marion Saden Professor of Political Science and Professor in the Institution for Social and Policy Studies at Yale University. This interview is based on his new book, Disorder: A History of Reform, Reaction, and Money in American Medicine (Yale University Press, 2021).

JF: What led you to ​write Disorder?

PS: I come from what you might call a medical family. My father was a pulmonologist, researcher, and professor of medicine, and my mother a public health nurse. I had other interests, which however led in a roundabout way back to medicine as a fascinating thing from a political as well as scientific and historical standpoint. My main area of inquiry when I started research on the book concerned the inequities in the affordable payment for and just distribution of health care, which to me seemed something that the invisible hand of the market was unable to fix. Also, it was clear that the market failed its main promise to promote efficiency therefore the husbanding of society’s scarce resources. But along the way I discovered the intensely political questions about the quality of medical care that is paid for and distributed, which has always left much to be desired. So my book ended up being about the complex, intertwining issues of “quality, equality, and economy.” Finally, in the course of research, two additional political questions came to the fore: first, public health as prevention to make medical care unnecessary, especially for vulnerable groups in society, and second, the pervasive economic conflicts of interest in the medical profession and the rest of the medical-industrial complex that dash medical and lay reformers’ valiant efforts for  improvements in quality, equality, and economy against the rocky shoals of vested interests–and sink them in stormy political seas.

JF: In 2 sentences, what is the argument of Disorder?

PS: That’s a tough one. Oops, that’s already one sentence. Now two. Organized medicine in America has undergone several major political transformations, from its Progressive era starting around the 1870s, focused to a great degree on public health, to a hard-right turn in the 1920s, focused primarily on the economic and professional interests of physicians, and finally, today, to a schizophrenic state pulled in both conservative and progressive directions. The tumultuous arc of political change is one in which political ideology and economic interests often trump science and the altruistic mission of the medical profession. That’s six sentences, sorry.

JF: Why do we need to read Disorder?

PS: Currently, and well into the future, we have to confront massive public health crises associated with rapid global warming and emerging infectious diseases crossing the increasingly porous borders between animal species and nations. Solving these problems will require political alliances between lay groups and the medical profession. For that to happen, the medical profession has to reform itself first—“physician, heal thyself!”—and use its formidable power in the halls of politics to prevent death and destruction from disease, not just treat it with increasingly expensive—and highly profitable—drugs and medical devices. My book will help inform the profession as well as the public about why this is so hard, but also, one hopes, how to go from here.

PS: I’m actually a political scientist “by trade” but my interests are largely about things that can’t be counted and analyzed using sophisticated quantitative methods. Those, to a large and somewhat excessive extent, are a fixation in the political science discipline. Of course, to be fair, there are many in it who also do “qualitative” and essentially historical analysis. But often, I find, their evidence also leaves much to be desired. Their output is often what I call “tertiary”—it relies on secondary sources which themselves rely largely on secondary sources. I often rely on works by historians whose meticulous primary research I admire, and I have sought to do the same to satisfy demands on myself for authenticity in what I write.

PS: I’ve already done a lot of research for a book I’m thinking of calling The Silent World of Doctor and Society. The title echoes the eye-opening book by bioethicist Jay Katz called The Silent World of Doctor and Patient. Also historical, it will address the problems of creating and fulfilling what bioethicists call a social contract between the profession and society. Historically, any reasonably conceived social contract has been impossible because of the medical profession’s circling of wagons and code of silence against societal forces asking what are they actually getting of value in exchange for what they give the profession in resources, prestige, monopoly, and power—and for insisting on a say in the matter. One could say the social contract is a macro, collective version of informed consent and patient-centered and jointly negotiated care in the individual clinical encounter.