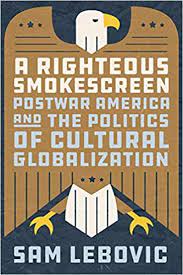 Sam Lebovic is Associate Professor of History at George Mason University. This interview is based on his new book, A Righteous Smokescreen: Postwar America and the Politics of Cultural Globalization (University of Chicago Press, 2022).

JF: What led you to write A Righteous Smokescreen?

SL: Raised in an Australia awash with American culture, I have always been interested in how the U.S. exported its culture to the world, and have been trying to explain it without simply presuming that the U.S. culture was “better” or more “popular” than other cultures. After moving to the U.S. I also became interested in what seemed a surprising corollary – that U.S. culture, particularly after World War II, was itself quite insular and parochial, that it imported very little.

It took me a while to work out how to turn those impulses into a research agenda, but after my first book came out in 2016, I was looking for a new project, and keen to do something quite archivally based. (I wanted to take advantage of the fact that I had moved to DC and the archives were close. I think I also took some psychological solace, among the swirling controversies of the early Trump years and the jittery rhythms of media discourse, in feeling that I was slowly working towards adding something new to our knowledge of the American condition.) So I started looking at all these obscure bureaucracies and diplomatic conferences concerned with the exchange of information in the 1940s and realized there was a new political story to be told about how the place of cultural globalization in America’s construction of the postwar order.

JF: In 2 sentences, what is the argument of A Righteous Smokescreen?

SL: After World War II, American policy-makers constructed an international flow of culture in which the U.S. was primarily interested in exporting culture, and imported very little. Their obscure work not only explains the curiously lop-sided nature of cultural globalization after World War II and helps us rethink the limits of the “liberal international order” – it also shows that the globalization of culture didn’t just happen, but was shaped by politics, institutions, and bureaucrats.

JF: Why do we need to read A Righteous Smokescreen?

SL: Well, no-one needs to read anything, let alone my stuff! But if you are interested in thinking about the global politics of culture, are concerned about the fate of “liberal internationalism,” or want to understand why Americans know so little about the world despite their outsized impact on the world, I think you will find the history I have put together interesting and hopefully thought-provoking. A Righteous Smokescreen also makes a case that obscure bureaucrats sitting on forgotten boards can have a big impact on world history; I think it is a nice study of how political power works. And you’ll learn how one woman decided which Americans could get passports for 27 years, how $11 billion dollars of leftover war material helped the U.S. build new embassy buildings, dominate civil aviation, and fund educational exchange programs, and a number of other surprising facts about the globalization of the world and the history of American politics.

SL: I was an undergraduate at the University of Sydney, studying law and politics and some European history. But I was a bit bored, and I heard a lecture on the history of sexuality by one of the Americanists, Stephen Robertson, which was based largely (in my memory) on George Chauncey’s Gay New York. It blew me away, and I subsequently took a bunch of Stephen’s classes, which were all U.S. history courses, with a heavy dose of cultural history. (In a funny twist of fate, Stephen moved to George Mason shortly after I was hired, so we are colleagues today.)

I loved the freedom that being a historian gave me – I didn’t have to choose to prioritize law or economics or literature or politics, but could look at their interactions. As I began writing research papers, I realized the benefits of studying an English-speaking country. (I am terrible at languages.) And for the questions I cared most about – political culture, capitalism, liberal democracy, censorship, imperialism – the U.S. was obviously ground zero in the 20th century. So I applied for grad schools in the U.S., was lucky to be accepted to the University of Chicago and was on my way.

SL: I am writing the first narrative history of the Espionage Act, which has been used not only to jail spies, but also pacifists and radical dissidents in World War 1, and leakers of classified documents today. The history of this controversial law provides an excellent window into the history of the national security state, and the threats that secrecy poses to democracy. It’s under contract with Basic Books, and should be out in Fall 2023.