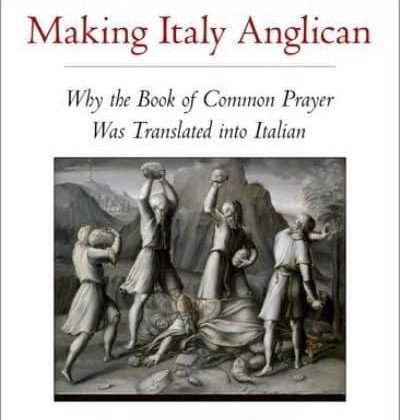 Stefano Villani is Professor of Early Modern European History at the University of Maryland. This interview is based on his new book, Making Italy Anglican: Why the Book of Common Prayer Was Translated into Italian (Oxford University Press, 2022).

JF: What led you to write Making Italy Anglican?

SV: In 1608 William Bedell, the chaplain of the English Ambassador to Venice, promoted a translation into Italian of the Book of Common Prayer, the liturgical text of the Church of England, in order to foster a schism of the Church of Venice. As bizarre as it may seem today, this was not a far-fetched idea at the time. Such an attempt followed hard on the heels of a period of intense polemics between Venice and Rome that had led to an Interdict, a sort of collective excommunication, inflicted by the Pope on the entire city of Venice. Paolo Sarpi, the most important Venetian theologian of those years, collaborated with Bedell. The project failed, and there are no known copies of this first translation, but starting with the publication in London of another translation in 1685, the Italian version of the Anglican Prayer Book was republished multiple times. The subsequent editions, however, served exclusively as propaganda pieces: It was only at the end of the nineteenth century that the text was actually used for liturgical purposes in congregations of Italian immigrants in Great Britain and the United States of America (in the modified version of the American Episcopal Church).

I encountered this story while working on a larger project on English translations of Italian texts and on the publication of Italian texts in England in the early modern age. I quickly realized that no one had ever worked on this issue and I thought the idea that a liturgical text could favor the reform of the Church of Rome and of Catholicism was an incredibly interesting topic.

Beginning with the first Italian translation of the Book of Common Prayer done in 1608, there were, for almost three hundred years, those in England who believed, in different and changing ways, that the distribution of the English liturgical text rendered into Italian could trigger radical change in the political and religious landscape of Italy. The aim of the Italian translation was to present the text to the Italian religious and political elite in the belief that the English liturgy embodied the essence of the Church of England. The beauty, harmony, and simplicity of the English Prayer Book intended to demonstrate that the English Church came closest to the apostolic model.

JF: In 2 sentences, what is the argument of Making Italy Anglican?

SV: The leitmotif running through the various incarnations of these Anglican “propaganda” projects, above all at the beginning of the seventeenth century and in the nineteenth century, is the idea of promoting top-down reform according to the model of the Church of England itself.

The book then demonstrates how, beyond the religious aspect, this project also nourished the English imperial aspirations and desires in the Mediterranean. But, as we know, the missionary work did not lead to the conversion of Italians, the birth of a national Church, or the colonial conquest of Italy. The interest in reconstructing these events lies in what the Italian philosopher Benedetto Croce defined as the “extraordinary efficacy of the failed experiment”.

JF: Why do we need to read Making Italy Anglican?

SV: As Roy Foster once wrote, “the most illuminating history is often written to show how people acted in the expectation of a future that never happened.” This book tells one of these histories. It is the story of a fruitless encounter that helps us better understand both the changing self-perception of the international role of the Church of England and the cross-cultural and religious relations between Britain and Italy. In doing so, it shows how Italy, as the heart of Roman Catholicism, was for a long period of time at the very center of the global ambitions of the Church of England (an aspect that historiography has so far underestimated, if not completely overlooked).

The history of a failed missionary endeavor says much more about the missionaries than their target audience. For this reason, this book appeals to anyone interested in British history and in missionary, imperial and emigration studies. As an attempt to write a global history of the religious entanglements between Italy, Britain (and also of the US), you need to read it if you are interested in historical complexity. British imperial expansion moved in parallel with the construction of a self-image by the British political, cultural and religious establishment that underlined the civilizing role of England. Making Italy “Anglican” — triggering a reform of the Church of Rome that would abate Papism, transforming it into a National Church — was an important part of the project.

SV: If by “American historian” you mean someone who deals with American history, it has yet to happen. I am a historian of early modern Europe, even if my interests in religious history, as in the case of this book, extend through to the nineteenth and early twentieth centuries. If, on the other hand, you mean why from Italy, where I was an associate professor in the history department of the University of Pisa, I moved to the US, this was, in the first place, because I followed my wife, who had obtained a position in this country. I liked the idea of starting a new academic career in an environment which at the time seemed livelier and more dynamic than the Italian one. My interests in the history of British Protestantism matured thanks to my encounter with the late Prof. Onofrio Nicastro, who would become my M.A. supervisor. In addition to being an exceptional scholar in his own right, he had very close contacts with the British academic community: over the years when I was studying in Pisa, he invited as a visiting professor Christopher Hill, who was then the most important scholar of seventeenth-century England. It was these meetings and the readings I did in those years that convinced me of the extraordinary importance of the English revolutionary fracture that led to the beheading of Charles I in 1649.

More recently, however, my research on Protestant missionary activity in Italy has led me to study the activity of Protestant churches towards Italian immigrants. As I mentioned, the final chapter of the book is devoted to the Italian-speaking congregations of the Episcopal Church, from their birth in the nineteenth century to their dissolution in the first decades of the twentieth century. This is a topic in the history of the religious entanglements between Italy and America that had been completely overlooked by the historiography. I am planning to work more on this topic. Therefore, it cannot be excluded that sooner or later I too will become, if not an American historian, someone who works on American history.

SV: In the immediate future, I am working on a series of seventeenth-century history projects; among these, the most advanced one is the critical edition of an account of the journey that Cosimo de’ Medici, future Grand Duke of Tuscany, made to the Iberian Peninsula and Northern Europe in 1669. I hope to complete this research by 2022.

As a longer-term project, linked to the one I just concluded with the publication of Making Italy Anglican, I intend to do specific research on Anglican and Episcopal chaplaincies in Italy and, as I have already mentioned, on the activity of the Episcopal Church with regard to Italian immigration to the USA. The Anglican communion, based on an episcopal hierarchy and with a worship and liturgy that could recall the Roman Catholic one, in fact adopted missionary strategies very different from those of the other Protestant churches.