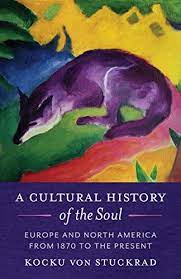 Kocku von Stuckrad is Professor of Religious Studies at the University of Groningen. This interview is based on his new book, A Cultural History of the Soul: Europe and North America from 1870 to the Present (Columbia University Press, 2022).

JF: What led you to write A Cultural History of the Soul?

KS: In previous books, I had studied “alternative spiritualities” such as astrology, the “New Age,” and shamanic practices in North America and Europe. In many of these milieus, ideas about the soul (of the human, of nature, and of the cosmos) play an important role when it comes to spiritual identities and practices, and I wondered where these ideas actually come from. Looking closer, I was struck by the observation that professional psychology today has no use whatsoever for the term “soul,” while outside of the universities the soul seems to be everywhere. A good hundred years ago, the situation was quite different: thinking about what the soul is and does, was part of a large intellectual discussion in Europe. How can we understand this cultural change? I was curious to find out.

JF: In 2 sentences, what is the argument of A Cultural History of the Soul?

KS: In my book, I reconstruct the concept of the soul in its cultural setting since the end of the nineteenth century, with special emphasis on its important role in emergent psychology, in philosophy, politics, literature and the arts, as well as in the humanities and the sciences. I argue that these cultural arrangements are the main reason why, since the 1970s, concepts of the soul have been blended with concepts of consciousness, spirituality, and nature, gaining more and more influence in wide areas of North American and European populations today.

JF: Why do we need to read A Cultural History of the Soul?

KS: Many people find it hard to understand why secularization in Europe and North America hasn’t led to the decline of religion and spirituality. A Cultural History of the Soul demonstrates that the common narrative of a “secular modernity” doesn’t capture what actually happened in these societies. What we see instead is that secular cultures produce their own forms of religion and spirituality. Concepts of the soul—and related concepts such as animated nature, life-energy, mind, and consciousness—provide a nucleus around which identities were formed that are in line with secular science but also respond to spiritual quests in Europe and North America. If you want to understand where these identities and practices come from, this book will provide you with a lot of material from the sciences, from philosophy, from literature, from politics, and from religion and spirituality.

KS: Since my graduate studies in the 1990s, I’ve been working on the history of science, philosophy, and religion in Europe. The various intellectual and political links between Europe and North America in the nineteenth and twentieth centuries brought me into American history, as well. For many of the currents I have studied—from the transpersonal movement to nature-based spiritualities, theosophy, paganism, and astrology—America is a major hub in an increasingly globalized setting.

KS: In my scholarly habitat of “religion and ecology,” a lot is going on these days. Troubling the common distinctions between the humanities and the sciences—which I have done in A Cultural History of the Soul, as well—has become a pretty big intellectual movement that uses concepts such as “biosemiotics” or “agency” to make sense of planetary life without prioritizing human perspectives. Taking seriously the “agential networks” that we find on this planet is a much-needed correction to the anthropocentric worldviews and practices that underly the human-induced climate crises we are currently facing. I want to explore how the study of religion and spirituality can contribute to this ongoing discussion across disciplines and cultural locations.