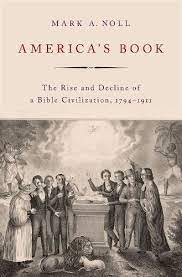 Mark Noll is retired Professor of History at Wheaton College and the University of Notre Dame. This interview is based on his new book, America’s Book: The Rise and Decline of a Bible Civilization, 1794-1911 (Oxford University Press, 2022).

JF: What led you to write America’s Book?

MN: I became interested in the history of the Bible in the late 1970s when a few historian friends and I concluded that study of how people actually put Scripture to use deserved some of the attention that (at least in our circles) was so obsessively paid to what Scripture was and what it was supposed to mean. A conference in 1979 was the first result. Research and reading about many aspects of this very large subject continued, though with frequent interruptions, until in 2016 I was able to finish In the Beginning Was the Word: The Bible in American Public Life, 1492-1783, and now this past year America’s Book. The more I worked on the subject, the more I was convinced that going deeper into the America past before ca. 1910 made a needed historical contribution, but also offered considerable instruction for the present.

JF: In 2 sentences, what is the argument of America’s Book?

MN: This book explores the public history of the Bible between 1794, when an unprecedented number of Americans vociferously rejected Tom Paine’s attack on Scripture in The Age of Reason, to 1911, when a great burst of civil religion celebrated the 300th anniversary of the King James Version. It charts positive and negative results from Protestant efforts to establish a national civilization on “the Bible alone” (1800-1830), from the collapse of that aspiration due to ferocious white Protestant controversy over whether the Bible sanctioned slavery, and from the eventual emergence of genuine pluralism regarding Scripture (Black, female, Roman Catholic, Jewish, skeptical, alongside white and male Protestant).

JF: Why do we need to read America’s Book?

MN: I may attempt a book explaining why I have been fascinated with the history of Christianity in Canada and what, as a Yankee looking north, strikes me as most similar to, and most different from, the parallel history in the United States.