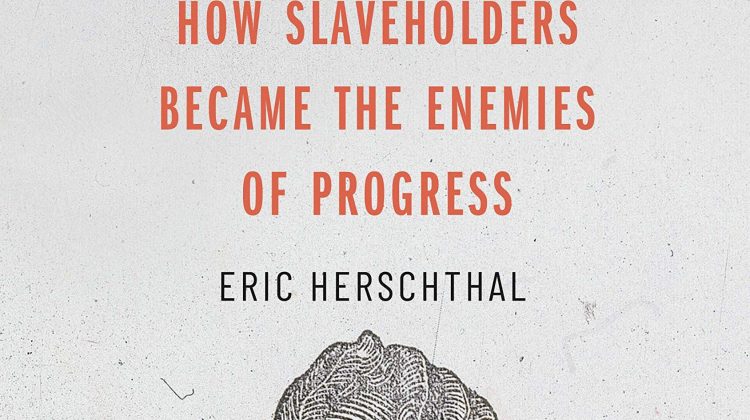 Eric Herschthal is Assistant Professor of History at the University of Utah.  This interview is based on his new book The Science of Abolition: How Slaveholders Became the Enemies of Progress (Yale University Press 2021).

JF: What led you to write The Science of Abolition?

EH: I was originally lured by a strange primary source written by Benjamin Rush, a leading physician in the early republic and prominent white abolitionist.  Written in 1792, the essay made a medical case against slavery by arguing that Black people were fully equal to white people – they had both sprung from the same divine pair – but that, oddly enough, if Black people were emancipated they would gradually turn white.  That an abolitionist could argue, in effect, that Black people were both fully equal and that their “blackness” was somehow an aberration from the norm, that Blackness was, as Rush argued, a disease which emancipation would help cure, fascinated me.  But as I began to research the ways antislavery men of science and abolitionists used scientific ideas to attack slavery, I realized that, first, among white antislavery reformers, Rush’s views of Blackness were actually not that abnormal: many white men of science, including those opposed to slavery, believed that Blackness was somehow unnatural.  And second and perhaps more importantly, I realized that men of science and abolitionists, Black and white, drew upon a wide range of scientific ideas that had little do with race to attack slavery. They argued, for instance, that steam-engines could replace slave labor, and that slave-grown commodities, like sugar, could be made in a test-tube, eliminating the need for enslaved labor.

JF: In 2 sentences, what is the argument of The Science of Abolition?

EH: My book argues that the scientific arguments Black and white abolitionists made against slavery—arguments that went far beyond racial science and ones that have received little attention—helped create the myth that slaveholders were backward, or antimodern. It speaks to the growing emphasis among historians of slavery’s compatibility with modernity—how it fueled the rise of capitalism, science, medicine, and technology. But rather than challenge these scholars (I actually agree with them—slavery was modern), it asks where the idea that slavery was backwards comes from in the first place.  By routinely portraying slaveholders as the enemies of science, I argue that abolitionists helped created that myth. (Okay, three sentences…)

JF: Why do we need to read The Science of Abolition?

EH: In part because many of us are used to hearing about how science and technology have been used to, and continue to, oppress Black people. But we are generally ignorant of the ways Black people and their allies used scientific ideas to challenge racism.  I also hope historians of science will find some its emphases refreshing, and I hope challenging. Refreshing because, unlike much of the traditional scholarship on slavery and science, I spend less time on the ways abolitionists mobilized racial science to attack slavery (and when I do, I tend to highlight the implicit problems with those arguments. See: Rush). Instead, I give more space to antislavery scientific ideas rooted in chemistry, geology, astronomy, botany, and engineering, among other disciplines.  That’s where the arguments about new machines replacing slave labor comes in, or the idea of making sugar in a laboratory. One hope is that this shift away from racial science and toward other fields of scientific inquiry, ones that, at first blush, might appear to have little do with slavery, will inspire scholars to explore other arenas of science that also bore on the problem of slavery (I know that my book only scratches the surface). As for the challenge to historians of science, I hope my book is read as a subtle critique of the default of position of many historians of science these days—a position that, not wrongly, aims to expose science’s complicity in all the horrors of the modern world.  All of this is true, to be sure, but I also feel that this scholarly emphasis tells only half the story. To see how Black people themselves drew upon and deployed scientific ideas for their own liberation should, I hope, remind us that it is not science itself that is the problem, but rather the way people deploy it.

EH: When I was in college, I was torn in two directions: on the hand, the idea of becoming a history professor, which emerged from my attraction to taking course by remarkable scholars, including Cornel West, Anthony Grafton, and Sean Wilentz. These teachers, and others, had, for the first time really, helped me fall in love with learning, especially about the past. History became less an instrumental thing – something I needed to study to pass a class – and something that instead woke me up to the shear contingency, the man-made nature of the our present world, and implicitly, suggested the we could yet remake the world again. But I was also pulled in another direction—journalism—and, strangely enough, by many of these same teachers, who were also public intellectuals. In addition to their scholarly work, they wrote for publications like The New Review of Books, The New Republic, and Harper’s, which showed me that there was a wider audience for serious intellectual debate; you didn’t only need the relative privilege of a college classoom to be immersed in it. So even before I went into a PhD program, I spent years – six before graduate school – as an old-fashioned journalist (not counting much of my college career as a student journalist).  But when I was approaching my thirtieth birthday, I felt like it was the last chance I had to go back and get my Ph.D., and pursue an academic career, before life got in the way. Happily, I got into a great program, and again with phenomenal teachers—Chris Brown, Eric Foner, James Delbourgo, David Waldstreicher, Annette Gordon-Reed—all of whom encouraged me to pursue both a traditional academic career, and to write for a broader public.

EH: I don’t want to jinx it, but I’ve made enough progress that I think there’s a good chance it’ll come to fruition: it’s a history of slavery and the origins of climate change.  The project is partly inspired by a recent group of Science Technology Studies (STS) scholars who argue for theorizing our current ecological era not as the “Anthropocene”—the standard phrase for our current geological era, in which humans are the leading agents of planetary change—but instead for something like the “Plantationocene” or “Capitalocene.” By this, they mean that we need to foreground the ways capitalism and its attendant ills—racialized labor and colonization—are really the core forces that gave rise to our modern, carbon-intensive global economy.  To date, however, no scholar has actually approached this as a historical issue to study in detail—in remains, for the most part, an argument, a proposition, without a historical study that provides the detailed evidence.  That’s what I want to do – tell this as straight history, and in a way that makes slavery’s role very concrete in the origins of climate change. I plan to do this by showing how slavery in the New World directly influences the two core dynamics that continue to cause some much greenhouse gas emissions: deforestation and the turn towards fossil fuels.  I’m figuring out now how to calculate the carbon footprint of slave-grown commodities – rice, sugar, tobacco, etc. – as well as the carbon footprint of coal-fired factories in 19th century England that are reliant on slave-grown cotton. That, in any event, is the gist.