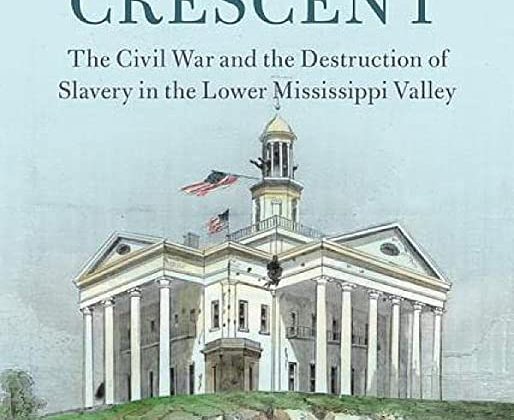 John Rodrigue is Lawrence and Theresa Salameno Professor in the Department of History at Stonehill College. This interview is based on his new book, Freedom’s Crescent: The Civil War and the Destruction of Slavery in the Lower Mississippi Valley (Cambridge University Press, 2023).

JF: What led you to write Freedom’s Crescent?

JR: The short answer is that this book developed out of my previous one, Lincoln and Reconstruction. That book, which appeared in 2013 and was written for Southern Illinois University Press’s Concise Lincoln Library Series, was by definition short. But it occurred to me there was a lot more I could say, especially about the ending of slavery and wartime Reconstruction in the states of the lower Mississippi valley.

The long answer, however, is that this book brings together much of what I have been doing in my academic career over the last thirty years. My first book, Reconstruction in the Cane Fields, examined emancipation and the transition from slavery to free labor in the sugar region of southern Louisiana. While I always considered myself a “southern” historian, it was through this work that I came to focus in particular on Louisiana history (both the state and Louisiana “writ large”) and on wartime Reconstruction. While teaching Louisiana history, Reconstruction, and other topics at Louisiana State University, I developed some of the ideas in my current book. Even before that, my first academic position after I earned my PhD at Emory was as an editor on the Freedmen and Southern Society Project at the University of Maryland, College Park. I am an editor of one of the volumes in the documentary-editing series Freedom: A Documentary History of Emancipation, 1861-1867. In fact, I worked on the first volume that deals specifically with the post-war period—the volume Land & Labor: 1865, and so my new book brought me back to familiar materials. After I moved to my present position at Stonehill College in 2007, I began to develop a serious interest in Abraham Lincoln, which led to the opportunity to write Lincoln and Reconstruction. My teaching has also prompted me to delve more deeply into the writings both by and about the abolitionists. The challenges that the abolitionists faced, and their difficulties in resolving them, have also shaped this book. Finally, even though I am not a military historian, I have always enjoyed reading the classic narratives of the Civil War—Shelby Foote, Bruce Catton, Douglas Southall Freeman, and of course James McPherson. (I haven’t read Allan Nevins yet, but I hope to do so.) So my new book was an opportunity to bring together this previous reading, research, writing, and teaching. I guess you could say that I’ve been working on this book, without really knowing it, for the last thirty years.

JF: In 2 sentences, what is the argument of Freedom’s Crescent?

JR: By examining the destruction of slavery in the states of the lower Mississippi valley (Louisiana, Mississippi, Arkansas, and Tennessee) during and just after the Civil War, this book illustrates the multi-dimensional process of emancipation that occurred throughout the entire South—something that can be said of no other part of the Confederacy. Also, this book demonstrates that the transition from the Emancipation Proclamation to the abolition of slavery as an institution was not nearly as clear, direct, or inevitable as we often assume.

JF: Why do we need to read Freedom’s Crescent?

JR: The importance of the Mississippi River and Vicksburg to the military outcome of the Civil War has long been understood. Scholars of emancipation and of wartime Reconstruction have also devoted much attention to the states of the lower Mississippi valley or to particular localities or communities within the region. In all of the vast literature on the Civil War and on emancipation, however, this is the first book to examine the destruction of slavery in this distinct and historically important geographic area as a whole. It brings together into a coherent narrative the major military campaigns, the “on-the-ground” disintegration of slavery, and political developments in the four states and in Washington, DC, in tracing the most thoroughgoing social revolution the United States has ever experienced.

This book, moreover, makes a larger argument about how the abolition of slavery was achieved. Conventional wisdom holds that the Thirteenth Amendment was originally envisioned as a stand-alone measure to give constitutional sanction to the Emancipation Proclamation, which freed slaves but did not abolish slavery as an institution. This is not how it happened, however. Instead, contemporaries saw the problem of abolishing slavery as inseparable from the issue of restoring the rebellious states to the Union. Indeed, it was largely assumed that the states would abolish slavery, as part of the process of state restoration. Owing to Union military success in the region, the lower Mississippi valley—and Louisiana and Tennessee in particular—emerged as the crucible within which military emancipation would have to be translated into the political objective of constitutional abolition. The Thirteenth Amendment was eventually adopted as a supplement to—not as a substitute for—state-level abolition. In short, the challenge of moving from military emancipation to constitutional abolition was just as difficult as had been the shift from a war solely to preserve the Union to the adopting of the Emancipation Proclamation. Because of the exigencies of wartime Reconstruction, the lower Mississippi valley can very much be seen as the epicenter of emancipation in the South.

JR: I have loved history for almost as long as I can remember. I read about it voraciously when I was young and devoured historical documentaries and movies on television. As I was watching one such documentary, the talking head was identified as a “historian,” which I thought was pretty interesting, even though I had no idea what a “historian” did for a living. When I took one of those standardized tests in grade school, in which you had to indicate your career aspirations, I put down “historian.” (My teacher informed my parents of this during a parent-teacher conference.) In high school I excelled in history, and as I began to think about college, I knew I wanted to major in history—even though I still had no idea where it would lead. My parents, to their credit, never tried to dissuade me from studying history, although neither of them had attended college. It was in college, of course, that I finally learned what a “historian” does, and I pretty quickly fell in love with the life of the mind and decided (after a short dalliance with the idea of studying law) that I wanted to pursue graduate study in history. I had great teachers as an undergraduate, and they encouraged this interest—while warning me of the realities of the academic job market (which was bleak in the early 1980s and has never improved). Graduate school was challenging, to be sure, but through a combination of hard work, determination, and good fortune, and no small measure of love and support from my family, I was able to make it through and embark on an academic career. Despite all of the problems facing academia today, I still can’t quite believe that I get to “do” history for a living.

JR: My “next” project has already had a long, somewhat tortured history. After completing Reconstruction in the Cane Fields twenty years ago, I had a couple of false starts in searching for a new project before deciding to embark upon an idea I had been cultivating since graduate school: a comprehensive study of the southern planters from the end of the Civil War through the advent of “Jim Crow” in the late-nineteenth century. My dissertation adviser, James Roark, had written the classic account of how the southern planters confronted emancipation, defeat, and the other consequences of the Civil War. That work, Masters without Slaves, published in 1977, focused mostly on the war years, with a final chapter that offered a broad overview of the Reconstruction period. There has been a wealth of scholarship since then on how both the former slaveholders and former slaves navigated the process of emancipation. My intention has been to build upon this scholarship to explore the ideological transformation that the various members of slaveholding families, from a generational perspective, had to undergo during the roughly twenty-five year period from the end of slavery in 1865 until the implementation of racial segregation and systematic disfranchisement in the early 1890s. I had already conducted significant research and accumulated a mountain of material before putting this project on hold for the last dozen or so years to write my last two books. Ironically, I saw the Lincoln and Reconstruction book as a chance to take a little breather from the planters project, but then that book led to Freedom’s Crescent, which became something of a magnum opus. The slaveholders have traditionally been classified among the villains of American history, but the scholarly study of them is still essential to our understanding of the past. I have a lot already invested in the planters project, and I’m looking forward to returning to it after all of these years.