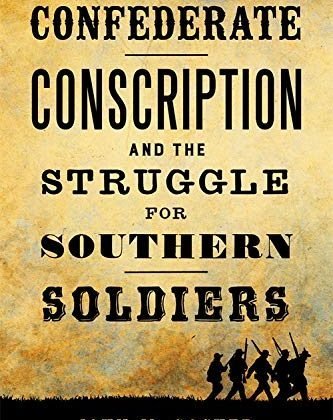 John Sacher is Associate Professor of History at the University of Central Florida. This interview is based on his new book, Confederate Conscriptions and the Struggle for Southern Soldiers (LSU Press, 2021).

JF: What led you to ​write Confederate Conscription and the Struggle for Southern Soldiers?

JS: Almost 25 years ago, my dissertation advisor Bill Cooper gave me a copy of the reissue of Albert Burton Moore’s 1924 work on conscription.  It took me several years to get around to reading it, but when I did, I was struck by how the topic merited a new study.  One of the greatest complaints about Civil War scholarship is that authors focus either on the battle front or the home front.  A study of conscription offers the chance to see where these two fronts come together.

Also, so much scholarship on the Confederacy focuses on rewriting the nation’s epitaph.  Scholars who stress states’ rights, class tensions, or just about any other fatal malady, employ conscription to support their argument.  However, when you look closely at their uses of conscription, they are often over-simplistic, almost always ignoring how the measure evolved from April 1862 until the end of the war.

I hope that my book contributes to a greater understanding of how the government, army, and ordinary people interacted during the three years that conscription operated.

JF: In 2 sentences, what is the argument of Confederate Conscription and the Struggle for Southern Soldiers?

JS: Conscription has often been portrayed as the most hated measure in the South, but it’s more aptly termed the most debated measure.  For three years, southerners tweaked the measure in an effort to solve the potentially unsolvable dilemma of how to keep enough men in the army and to keep the right men at home, and their debates reveal how Confederates tried to balance competing loyalties to nation, state, and home.

JF: ​Why do we need to read Confederate Conscription and the Struggle for Southern Soldiers?​​

JS: Like so many topics, conscription seems simple from afar, but a close study reveals an incredible amount of complexity.  Conscription is not a single measure passed by Congress in April 1862.  Instead, that measure inspired three years of debate over what it meant to be a Confederate.  This debate touched on—and threatened—all of the key Confederate ideals—states’ rights, individual white liberty, and slavery.  Simply put, southerners disagreed on how much of their cherished ideals they would temporarily sacrifice to achieve victory.  My book uses conscription as a lens to view these debates about Confederate ideology.

Also, I look at the measure through the perspective of those who experienced it.  I look at topics such as husbands and wives debating the merits and logistics of hiring a substitute who’d serve in a conscripted man’s place.  I have a chapter where I examine the difficulties of serving as an enrolling officer.  They faced men feigning illness, others hiding, and others claiming false exemptions.  In the 1860s, even figuring out a fact as basic as one’s age (and thus one’s eligibility for conscription) was extremely difficult.  To my knowledge, no one has ever looked at conscription from this perspective.  Plus, measures such as substitution and the Twenty Negro Law (which allowed planters an exemption for an overseer) which seem like offensive, class legislation today make more sense when viewed from the context of those living in the Confederacy.  Overall, my work helps to contextualize one of the most important acts passed in the Confederacy.

JF: Why and when did you become an Am​e​rican historian?

JS: Many years ago, I was an accounting major at the University of Notre Dame.  I found myself reading history for pleasure.  In particular, I read James McPherson’s magnificent Civil War study, Battle Cry of Freedom, and it made me want to change my major.  I figured I’d keep studying history as long as I enjoyed it and until I had to get a real job.  Luckily, thirty plus years later, that moment has not yet arrived.  Instead, I graduated from Notre Dame and continued my studies at Louisiana State University.  Since then, I have worked at Emporia State University, and I’ve now been at the University of Central Florida for 15 years.  As I tell my students, I started college in 1988, and I’ve never left.

JS: After I took almost twenty years on this project, it seems presumptuous to suggest my next book.  But, of course, like all historians, I have several (too many) future projects in mind.  The two that I’m most excited about are: (1) a study focused on 1832, a year full of momentous events—including the bank war, a presidential election, the nullification controversy, and an epidemic.  (2) Alternatively, sticking to the Civil War era, I’d write a narrative study of Confederate Louisiana.  There’s been a lot of great work done on aspects of the Civil War there in the past 50 years, and I think it’s time that someone synthesized that work into a single study.