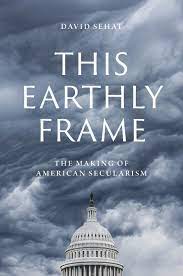 David Sehat is Professor of History at Georgia State University. This interview is based on his new book, This Earthly Frame: The Making of American Secularism (Yale University Press, 2022).

JF: What led you to write This Earthly Frame?

DS: My first book, The Myth of American Religious Freedom, offered a comprehensive history of American Christendom, the way that American Christians have used politics and the legal system to advance religious purposes. When it was published in 2011, some critics read that book as an indictment of American Christianity rather than as a warning about the dangers of the sectarian use of government. I decided to write This Earthly Frame to show the growth of an alternative vision of government, a secular one, and its relationship to religious ideas. One of the central arguments of the book is that American secularism, which I define primarily as a political arrangement rather than a personal irreligious stance, drew upon religious people for support. Those religious people offer a model of how to understand the proper relationship between personal religious ideals and governance in a pluralistic society.

JF: In 2 sentences, what is the argument of This Earthly Frame?

DS: This Earthly Frame shows that the American secular order did not flow seamlessly out of the American founding nor was it required by the Constitution as it was originally adopted. Rather, American secularism was the result of a layered religious conflict in the 20th century that played out in the courts and that left the U.S. Supreme Court with no option but the adoption of a secular order as a condition of social peace and political equality.

JF: Why do we need to read This Earthly Frame?

DS: Many discussions about the proper role of religion in American life tend to presume a past that did not exist. Conservatives nostalgically speak of a time in which religion (or Christianity) occupied a central place in public life. But they tend to gloss over or ignore or simply deny the social conflict that the public place of Christianity provoked. Many progressives speak as though the nation was born secular and tend to construe the contemporary activities of the Religious Right as a betrayal of founding arrangements. Neither of these conception are right. If you want to understand how the American secular order came into existence, why it has taken the peculiar shape that it has, why it is riddled with tensions and a certain amount of weakness, and why both conservatives and progressives tend to be unhappy with it, this is your book.

DS: I was a philosophy major in college in the mid-1990s, but I realized shortly after graduation how many times I invoked history without really knowing what I was talking about whenever contemporary American life was being discussed. My girlfriend (now my wife) suggested that I pursue graduate work in intellectual history. I started at Rice University before moving to UNC-Chapel Hill, where I graduated in 2007. I’ve been using history to understand contemporary social and political conflict ever since.