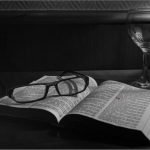 I was surprised last week to be informed that this coming year will be my last at Spring Arbor University. As a result of budget cuts, several faculty are being let go, including some of us with tenure. — Jeffrey […]

Whether you agree or disagree with him, Wilfred McClay is always thoughtful. If I see his byline at First Things or another conservative outlet, I will always read the article. As one of America’s best conservative historians (not a historian […]

Here is a taste of my recent piece at Sojourners: A nurse can learn how to insert an IV tube in a patient’s arm, but how will he develop the fortitude to enter a room filled with people suffering from infectious […]

“I am an evangelical Christian, so it was nice to hear a lecture about evangelicalism that was not related to contemporary politics.” This was our intern Annie Thorn‘s response to Bruce Hindmarsh’s lecture “John Wesley, Early Evangelicalism, and Science.” Hindmarsh, […]

Yesterday was our first day of discussion in Created and Called for Community (CCC). The students read Stanley Hauerwas‘s 2010 First Things essay “Go With God: An Open Letter to Young Christians on Their Way to College.” After some conversation about […]

Back in March 2011, I had a great visit to the Anselm House (at the time it was called the MacLaurin Institute) at the University of Minnesota.  I gave a lecture on the U of M campus, met with campus […]

I had some last minute Christmas shopping to do on December 24, 2018 so I drove down to Dallastown, Pennsylvania (about a 40-minute drive) to visit Byron and Beth Borger at Hearts & Minds Bookstore.  Beth was not around on […]

I am really glad to hear that Englewood Review of Books is growing and making a concerted effort to bring John Wilson aboard full-time.  Here is a letter from editor Christopher Smith and several other scholars, including historian Mark Noll: As you […]

Check out David Michael’s piece on Baylor humanities professor Alan Jacobs.  A taste: Early in his career, Jacobs experienced what might be called an extended crisis of audience, a crisis he recalled when I interviewed him in February. At the […]

Here is a taste from Dreher’s blog: I initially thought How To Think would be a basic primer of informal logic. It’s not that at all, but something more interesting. What’s the book about, and why did you write it?  Last year, […]

Baylor University humanities professor Alan Jacobs‘s latest book is How to Think: A Survival Guide for a World at Odds.  Over at Religion News Service, Jacobs talks with journalist Jonathan Merritt about the book and the state of Christian thinking. Here […]

I am happy to announce that in September I will be participating in a conference in Indianapolis titled “The State of the Evangelical Mind: Reflections upon the Past, Prospects for the Future.” Here is a description from the conference website: […]

Over at The Pietist Schoolman, Chris Gehrz riffs on my piece on intellectual loneliness by suggesting that loneliness, and even solitude, may be a good thing for Christians. Here are a few snippets from his post “The Loneliness (and Solitude) […]

The scandal of the evangelical mind is that there is not much of an evangelical mind.  An extraordinary range of virtues is found among the sprawling throngs of evangelical Protestants in North America, including great sacrifice in spreading the message […]