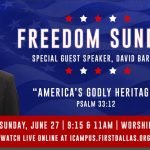 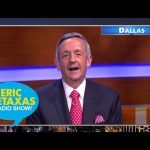 Eric Metaxas spoke at First Baptist Church on Sunday. Jeffress introduced him as “one of the premiere Christian thinkers of our day” and “the Francis Schaeffer of our generation.” Jeffress has always been prone to hyperbole, but his comments about […]

We have now had two nights of the DNC convention. Let’s check-in on the court evangelicals: I think this must have been taped before the convention, but watch Eric Metaxas and John Smirak mock Kamala Harris’s first name. And then […]

What have Trump’s evangelicals been saying since our last update? Samuel Rodriguez is upset about the prohibition on singing in California churches. You cannot permit tens of thousands to march in protest without masks and demand that 100 worshipers refrain from singing. That my […]

What have Trump’s evangelicals been saying since our last update? Jentezen is worried about the radical left controlling churches: California’s Governor just banned singing/chanting at church. Catholics can’t recite mass; Evangelicals can’t worship out loud. The very definition of discrimination is to allow thousands […] 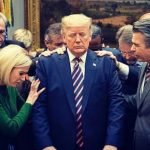 What have Trump’s evangelicals been saying since our last update? It looks likes COVID-19 was present at Robert Jeffress’s Sunday morning political rally at First Baptist-Dallas. Newt Gingrich is on the Eric Metaxas Show today talking about his new book Trump and the American […]

We can’t let Trump makes us numb to this garbage. At around 7:30am EDT on Sunday morning, Trump retweeted a part this video. [youtube https://www.youtube.com/watch?v=Bpua7fd3Dog&w=560&h=315] After Tim Scott condemned the video, Trump deleted the tweet. At around 9:00am, Trump tweeted […]

What have Trump’s evangelicals been saying since yesterday’s update? Eric Metaxas is still attacking systemic racism. Today one his guests said, “systemic racism does not exist. It is a conspiracy theory that the radical Left has been using to try to destroy the […]

If you had thirty minutes to say something to the most powerful man in the world, what would you say? This is how I started our short series titled “Three Sundays in April.” On April 12, 2020, Donald Trump watched […]

Here is court evangelical Robert Jeffress talking to Fox Business News host Lou Dobbs: [youtube https://www.youtube.com/watch?v=Z94dkrffkPo&w=560&h=315] 3 thoughts: 1. Jeffress should be careful about suggesting First Baptist Dallas, a bastion of segregation for most of its history, has never changed […]

You can sense the fear and anxiety in Robert Jeffress’s voice.  He is speaking with more urgency.  He is getting louder.  The fearmongering is growing.  The pastor of the First Baptist Church is doubling-down on his “civil war” comments he […] 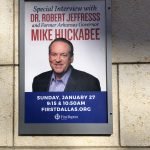 Here is what you can expect this Christmas at Robert Jeffress‘s First Baptist Church in Dallas: “A Night of Christmas” at First Baptist Dallas is on December 14, 15, & 16! Join us for an incredible theatrical performance with acrobats, […]

Stephen Young of the Dallas Observer has assembled some of court evangelical Robert Jeffress greatest hits.   Here is a taste: First Baptist Dallas Pastor Robert Jeffress deserves some credit. Motivations, politics and decency aside, he picked the right horse way back in the […]

Back in June, I wrote a post about the 150th anniversary of the founding of First Baptist Church in Dallas, the congregation led by court evangelical Robert Jeffress.  In that post I referenced Tobin Grant’s 2016 Religion News Service piece […]