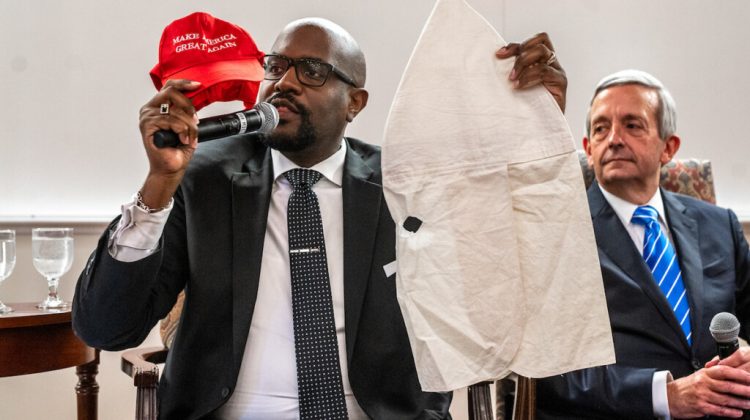 Robert Jeffress, the Trump-loving pastor of Dallas’s First Baptist Church, should get credit for showing-up at this event. It’s a step in the right direction. Here is Matt Goodman at Dallas Magazine:

Monday evening at SMU’s Dallas Hall, Dr. Michael Waters, a reverend who earned his doctorate from the university, elicited gasps from an audience of about 150 as he produced two props while speaking on a panel about the city’s history of racism. In one hand he held a Klansman’s hood; in the other a red MAGA baseball cap. The hood, he said, was an authentic artifact from the second rise of the KKK, in 1915, after the Methodist preacher William Joseph Simmons marched to the top of Georgia’s Stone Mountain to set a cross aflame. Simmons, Waters said, “put down a Bible, an American flag, a sword, and said he heard the very angels of heaven rejoicing as the Klan was born again.”

“I would suggest that this is the reincarnation of this symbol from a generation ago,” Waters said, referring to the red hat. “There are churches, both near and far, who advocate and express a vision of Christianity that is not the vision of the Christ that I serve, who came to liberate the oppressed.”

Waters, the senior pastor at Abundant Life A.M.E. Church, shared a stage with Dr. Robert Jeffress, the longtime pastor of First Baptist Dallas downtown; Rev. Virzola Law, the senior minister at Northway Christian Church in Preston Hollow; and Rev. Richie Butler, the senior pastor of the St. Luke Community United Methodist Church and the evening’s moderator. The occasion was one of the 40-plus events scheduled to discuss The Accommodation, retired journalist Jim Schutze’s 1986 book that explored how Dallas’ power structures—from political to business to ecumenical—worked to suppress the stories of racist violence that existed here during the civil rights movement.

The pre-panel buzz was that Jeffress—who has spent much of his life at First Baptist, first attending and then leading—wanted to address what the book detailed about his church in the 1950s and 1960s. A three-page chapter in The Accommodation focuses on W.A. Criswell, the former First Baptist pastor and, for many years, a fierce and vocal supporter of segregation. Under Criswell’s leadership, First Baptist became the largest Baptist congregation in the country, and Criswell was among the Southern Baptist Convention’s most respected voices. He was “speaking directly and specifically against court-ordered desegregation,” Schutze wrote.

The book quotes Criswell as saying, “Desegregating where we live is the stirring up of our people over a cause that, as of now, is not wisely presented. The people who seek to further this among us are not in sympathy with the great spiritual aims of our churches.”

Criswell’s dogma “was setting his congregation on fire back in Dallas,” and he took it national during two speeches in South Carolina in February 1956. The first was during the South Carolina Baptist evangelism conference, and the second was an address to the state Legislature the next day. Sen. Strom Thurmond, who would lead a failed filibuster to kill the Civil Rights Act the following year, had heard Criswell speak at the conference and invited him to share his doctrine with the Legislature. Criswell’s message was met with “shock” from other congregations around the country, Schutze wrote.

“It’s a fairly accurate chapter in what it reports about First Baptist Dallas,” Jeffress said Monday night. “We were not the only church that promoted racism and segregation, but we were certainly the most prominent church. We didn’t have any official dogma that said people of different races aren’t welcome here … we didn’t have to, because minorities didn’t feel comfortable.”

Jeffress said Criswell “said things that were absolutely wrong and racist.” But he described being 12 years old in 1968 and hearing Criswell preach a sermon titled “The Church of the Open Door,” in which he walked back his segregationist views and said “anybody can come” to First Baptist. Jeffress then shifted to more recent years. He told a story about former Mayor Tom Leppert joining First Baptist because, Jeffress said, Leppert found it to be the city’s “most diverse megachurch.” Jeffress pointed to the census of a second-grade class at the church’s school, which he said includes “four Whites, four Blacks, four Hispanics, and one Indian.”

The messaging from Waters and Law pushed the audience to think not just about representation, but about how inequality has shaped Dallas. Law, a Black woman, leaned more intimate, telling stories about how members of her congregation left Northway after her hiring. She spoke of being trailed by police officers in the Park Cities, despite having numerous degrees and leading a nearby church.

Waters spoke of the need to explore “christianities and churches,” emphasizing both words because “they are not all the same.” “We have to talk about America’s greatest Christian expression,” he said, “which has always been White Christian nationalism. Which, in my opinion, is idol worship.”

None of his comments were directed specifically at Jeffress—this was not a debate—but First Baptist’s pastors have long had an outsized role in directing public discourse, particularly the role faith should have in policy. In a recent sermon, Jeffress said he believes America has been “uniquely blessed” by God but rejected the label of a “Christian nationalist” because “God is no respecter of people or nations.” In a 2014 book, Jeffress wrote that President Barack Obama’s policies “are paving the way for the Antichrist,” focusing closely on the legalization of gay marriage.

And he aligned himself closely with former President Donald Trump, literally praying over him and offering his support on platforms like Fox News. His church invited Vice President Mike Pence to speak during a service in 2020. He went on TV and defended Trump no matter the calamity: the “shithole countries” line, the presence of “some very fine people on both sides” after the deadly Charlottesville riot, apparently paying hush-money to the adult film star Stormy Daniels to keep quiet an affair.

And yet, Jeffress said Monday, he felt his “personal endorsement” of the former president should not reflect upon his church. He said the public perception of First Baptist’s alignment with the Republican party occurred “not by intention but by happenstance.” (“I don’t own a MAGA hat, by the way,” Jeffress said.)

Read the entire piece here. Jeffress said he does not own a MAGA hat. Instead, he and his church promoted this song:

It is easy for Jeffress to reject Criswell’s racism and the church’s legacy of segregation, but what is First Baptist-Dallas doing to address this legacy? For example, the legacy of racism was absent from the church’s 2018 150th anniversary celebration. Compare the way First Baptist has failed to address this legacy with the work being done at St. Paul’s Episcopal Church in Richmond, VA, the so-called “Cathedral of the Confederacy.”