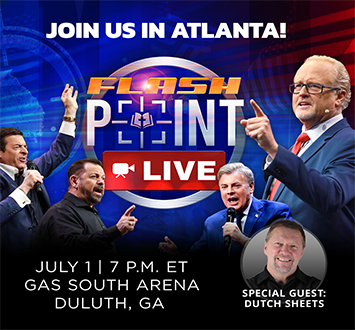 The above video is from July 1, 2022. It takes place in a Duluth, Georgia arena. The event is sponsored by Gene Bailey’s Flashpoint Church television show.

One of the men on the stage is Lance Wallnau, a Trump court evangelical who “prophesied” the former president’s election. (As far as I can tell there were no prophecies about 2020 apart from a divine word that the election was stolen). In addition to leading what Walnnau calls a “Christian populist movement” that is going to win back the country from the secularists, he also sells Donald Trump-King Cyrus prayer coins. Oh, one more thing, he thinks Kamala Harris is a modern-day Jezebel and a satanic “chameleon” who is working as an “Obama surrogate.”

The others on stage are Dutch Sheets, Mario Murillo, Bailey, and Hank Kunneman.

If you think folks like Wallnau are a fringe group, you would be wrong. There are hundreds of thousands of Americans, maybe millions, who follow these charismatics.

In the video above, they lead the audience in an oath called “The Watchman’s Decree.” Here are the words of that oath:

As a patriot of faith, I attest my allegiance first and foremost to the Kingdom of God and the Great Commission. Secondly, I agree to be a watchman over our nation concerning its people and their rights to Life, Liberty, and the pursuit of Happiness.

We the church are God’s governing body on the earth,

We have been given legal power from heaven and now exercise our authority,

We are God’s ambassadors and spokespeople over the earth,

Through the power of God we are the world influencers,

Because of our covenant with God, we are equipped and delegated by him to destroy every attempted advance of the enemy,

We make our declarations:

We know that this country was founded on Judeo-Christian principles.

We know the truth; therefore we stand for truth and will NEVER be deceived!

We will NEVER stop fighting!

We will NEVER, EVER, EVER give up or give in!

We WILL take our country back!

We will honor THE ONE TRUE GOD, the God of Abraham, Isaac, and Jacob!

AMERICA SHALL BE SAVED!

When this recitation is over, Wallnau goes into his Rocky Balboa stance, throwing air punches. And the crowd starts chanting USA, USA, USA.

At the end of the month, this dominionist tour is headed to Fort Worth where Turning Point USA president Charlie Kirk will be their special guest:

What is a “7 Mountain Dominionist?” Learn more from these posts. I covered their connection to Donald Trump in this book.