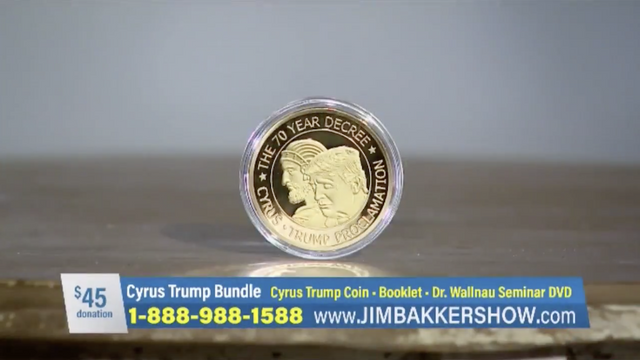 Here is a taste of my piece today at Religion News Service:

For centuries, Catholics have used rosary beads to aid them in the practice of prayer.  Some American Protestants view their Bibles as a kind of talisman or amulet that transmits supernatural power.

And today some American charismatic Christians pray using a coin emblazoned with a picture of Donald Trump.

On Monday (May 13), a charismatic preacher named Lance Wallnau appeared on the program of disgraced televangelist Jim Bakker to hawk a Donald Trump/King Cyrus gold coin.

He claimed that the coin can be used as a “point of contact” between Christians and God as they pray for the re-election of Trump in 2020.

Bakker’s show, which is syndicated daily on his PTL (Praise the Lord) Television Network, is known for selling his viewers products to help them survive the coming apocalypse. With the click of a mouse, a Christian who wants to prepare for the end of the world can buy buckets of freeze-dried food (the “30 Day Fiesta” Bucket appears to be popular), duffel bags that can withstand electromagnetic pulse attacks, flashlights and generators.

Wallnau and Bakker are selling the Trump/Cyrus coin for $45, but charismatic Christian viewers — many of whom identify as evangelical — can also drop $450 on a “13 Trump Cyrus Bundle” that includes 13 sets of the coin, the booklet explaining the connection between Trump and the former Persian king and the DVD of Wallnau conducting a religious service.