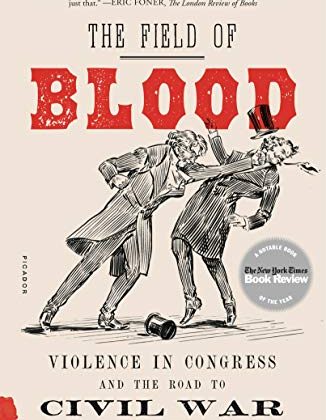 Here is part of what I wrote last night after the fourteenth ballot for Speaker of the House:

Before the end of the vote, McCarthy had to walk up the aisle to talk to Matt Gaetz to try to get him to change his vote. What a walk of shame. Imagine a guy who has wanted to be Speaker his entire life forced to beg accused sexual offender Matt Gaetz to vote for him as the American public watches on CSPAN. As McCarthy spoke to Gaetz, Rep. Mike Rogers of Alabama (a McCarthy supporter) lunged at Gaetz and screamed at him. There was no caning, but it was certainly dramatic. By the way, if blows did break out it would not have been the first time. Check out Joanne Freeman’s book The Field of Blood: Violence in Congress and the Road to Civil War.

I was hoping Freeman would comment on what happened last night. But before I share her thoughts, watch what happened on the floor of the House. Mike Rogers is the guy with the orange tie who had to be contained.

Here is Freeman today at The New York Times (although it appears she wrote this before the events of last night):

In recent days, we’ve watched congressional Republicans reap the whirlwind. In campaigning for the 2022 midterm elections, the G.O.P. rode a wave of extremism, saying little about the politics of hate and denial practiced by some of its candidates in an effort to capture votes.

The party is now paying a price for its silence. Its members are grappling with the reality of working with people who loudly and proudly challenge political institutions and the democratic process — in a democratic institution. During the speakership battle, that small group of extremists held the House of Representatives hostage.

This was far from the first time the House was mired in a stalemate over the speakership. It’s the 15th such battle in Congress’s history, and the ninth time that electing a speaker required more than three ballots.

Each of those times, the struggle was a litmus test of the state of party politics and the state of the nation. Our recent contest was much the same, exposing party fractures and irreconcilable differences, but unlike previous battles, it lacked a policy- and legislation-bound core. More than anything else, it was about power — a gap that reveals much about the state of the nation.

Take the speakership struggle of 1855-56, the longest in American history. It ultimately lasted two months and 133 ballots. Why? Because the fight over the fate of slavery created party chaos. The Whig Party was dying. The Democratic Party was splintered over slavery. A newer third party — the nativist Know Nothing Party (or the American Party) — had gained a block of seats, and there was an amorphous antislavery party forming: the Republican Party.

In this way, the 1855-56 speakership contest was like the present one. It was a product of fractured party politics. Finding one candidate who satisfied the many voting blocs was near impossible, and on the unyielding question of slavery compromise was difficult, if not impossible.

And now here is Freeman on the Rogers-Gaetz confrontation: