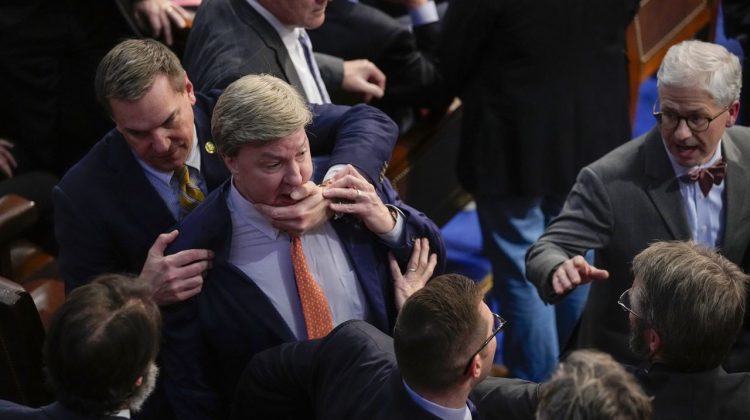 As I started this post at 11:14pm on Friday night there were still six people standing in the way of Kevin McCarthy’s speakership. They were Andy Biggs (AZ), Lauren Boebert (CO), Eli Crane (AZ), Matt Gaetz (FL), Bob Good (VA), and Matt Rosendale (MT). On the fourteenth ballot, McCarthy was unable to secure the speakership. He came into the session tonight expecting to have the votes to win, but these six members-elect had other ideas.

Before the end of the vote, McCarthy had to walk up the aisle to talk to Matt Gaetz to try to get him to change his vote. What a walk of shame. Imagine a guy who has wanted to be Speaker his entire life forced to beg accused sexual offender Matt Gaetz to vote for him as the American public watches on CSPAN. As McCarthy spoke to Gaetz, Rep. Mike Rogers of Alabama (a McCarthy supporter) lunged at Gaetz and screamed at him. There was no caning, but it was certainly dramatic. By the way, if blows did break out it would not have been the first time. Check out Joanne Freeman’s book The Field of Blood: Violence in Congress and the Road to Civil War.

It is also worth noting that two years after the violence of January 6, 2020 we almost had more violence in the chamber. And we got to watch it all because CSPAN cameras had free reign due to the fact that there was no speaker selected yet and the representatives-elect were not yet sworn-in.

A motion to adjourn until Monday failed and a fifteenth ballot was taken. McCarthy won as the six dissenters voted “present.” We don’t know what McCarthy promised these dissenters in order to pull it off on this ballot, but we can expect these right-wingers–MAGA election deniers all– to have a lot of power in the 118th Congress.

Many Americans may not understand why Biggs, Boebert, Crane, Gaetz, Good, and Rosendale held out for so long. Let’s remember that these people have followers. They got elected to their seats. They are celebrities in the MAGA media infrastructure. Just look at Twitter. Some of these tweeters have over 100,000 followers:

I could keep going, but I think you get the idea.

Trump apparently called the dissenters after the fourteenth ballot. According to reports, Rep. Marjorie Taylor Greene facilitated the calls with the former president. It is not clear how many of them spoke to Trump, but I fully expect him to take credit for McCarthy’s win:

Two years ago Donald Trump instigated the January 6th insurrection. Now he will claim that he got Kevin McCarthy, a man who flew to Mar-a-Lago and begged for Trump’s support only days after the violence, elected Speaker of the House. And he apparently convinced a bunch of election-deniers to help him do it. I am sure I will have more to say about this later.

But let’s end the night with Katie Porter (D-CA):