religion and the American Revolution 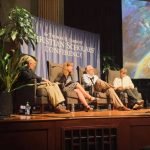 It was good to get back to conferences this weekend. I forgot how much there is to learn through attending conferences and how much face-to-face engagement is so much more effective at stimulating thinking than ZOOM events. On Thursday I […]

Recently evangelical writer and radio host Eric Metaxas interviewed Rev. Bill Cook, the “CEO” of the Virginia branch of the “black-robe regiment.” Watch: Some comments: There was no such thing as the “black robe regiment” in revolutionary America. Historian and […]