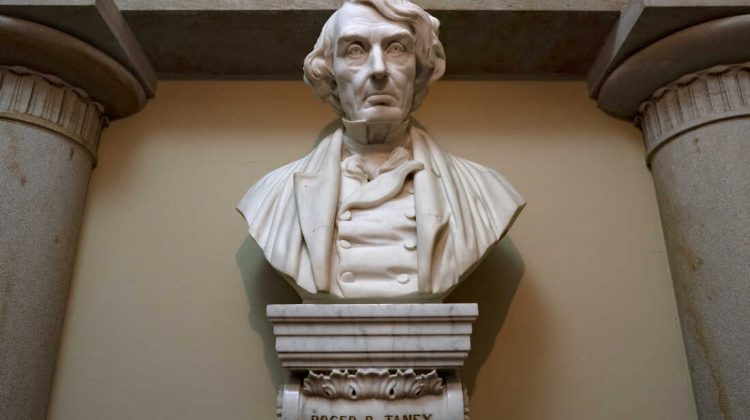 Earlier this week my U.S. history survey students answered a final exam essay question on the short-term causes of the American Civil War. I haven’t graded their essays yet, but if their blue books do not contain something about Roger Taney and the 1857 Dred Scott decision they will lose points.

Over at NBC News, Zoe Richards reports on a bill to remove a bust of the former Supreme Court justice from the U.S. Capitol and replace it with Thurgood Marshall.

The House passed a bill Wednesday that would remove from public display at the U.S. Capitol a statue of Supreme Court Chief Justice Roger Taney, who wrote the 1857 Dred Scott decision, which defended slavery and denied the citizenship of Black Americans.

The legislation, which the House passed by voice vote, declares that Taney’s authorship of the decision “renders a bust of his likeness unsuitable for the honor of display to the many visitors to the Capitol.”

“While the removal of Chief Justice Roger Brooke Taney’s bust from the Capitol does not relieve the Congress of the historical wrongs it committed to protect the institution of slavery, it expresses Congress’s recognition of one of the most notorious wrongs to have ever taken place in one of its 19 rooms,” the bill states.

The measure directs the Joint Committee of Congress on the Library to remove Taney’s bust, which sits inside the entrance to the Old Supreme Court Chamber in the Capitol, and replace it with a bust of Thurgood Marshall, the court’s first Black justice.

The Senate passed the bill last week by unanimous consent. It now heads to President Joe Biden’s desk for his signature.

We think … that they [black people] are not included, and were not intended to be included, under the word “citizens” in the Constitution, and can therefore claim none of the rights and privileges which that instrument provides for and secures to citizens of the United States. On the contrary, they were at that time [of America’s founding] considered as a subordinate and inferior class of beings who had been subjugated by the dominant race, and, whether emancipated or not, yet remained subject to their authority, and had no rights or privileges but such as those who held the power and the Government might choose to grant them.…

It is difficult at this day to realize the state of public opinion in relation to that unfortunate race, which prevailed in the civilized and enlightened portions of the world at the time of the Declaration of Independence, and when the Constitution of the United States was framed and adopted. … They had for more than a century before been regarded as beings of an inferior order … and so far inferior, that they had no rights which the white man was bound to respect; and that the negro might justly and lawfully be reduced to slavery for his benefit...

Now, … the right of property in a slave is distinctly and expressly affirmed in the Constitution. … Upon these considerations, it is the opinion of the court that the act of Congress which prohibited a citizen from holding and owning property of this kind in the territory of the United States north of the [36°N 36′ latitude] line therein mentioned is not warranted by the Constitution, and is therefore void….