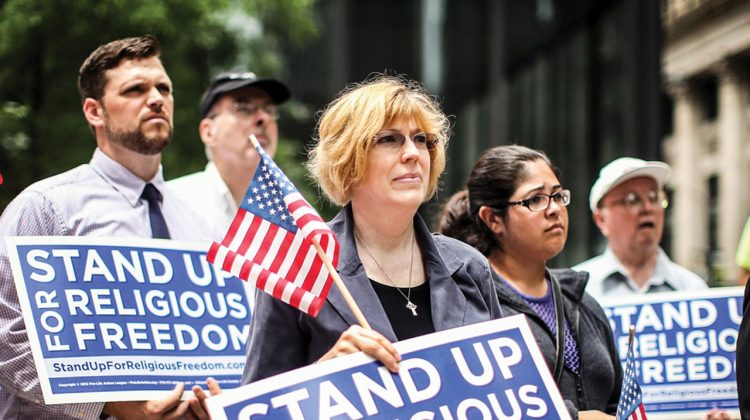 Here is Tish Harrison Warren at The New York Times:

This week, the Supreme Court will hear a case that will reignite a continuing conversation about what to do when long-established religious convictions clash with gay people’s civil rights. In 303 Creative LLC v. Elenis, a Colorado web designer, Lorie Smith, wants to create websites for clients’ weddings. She is a Christian, and because of her religious beliefs, she does not want to offer these services for same-sex weddings. However, she serves L.G.B.T.Q. customers for other design projects.

This week’s legal arguments will most likely focus primarily on questions around free speech: Can the government compel artists or designers to express messages that contradict their beliefs? In the public discourse more broadly though, this case, like the Masterpiece Cakeshop case in 2018, poses a question to us as a culture: How committed are we to true pluralism?

Pluralism is not the same as relativism — we don’t have to pretend that there is no right or wrong or that beliefs don’t matter. It is instead a commitment to form a society where individuals and groups who hold profoundly different and mutually opposed beliefs are welcome at the table of public life. It is rooted in love of neighbor and asks us to extend the same freedoms to others that we ourselves want to enjoy. Without a commitment to pluralism, we are left with a society that either forces conformity or splinters and falls apart.

Millions of Americans have irreconcilable views of sex and marriage, and this is unlikely to change any time soon. The historic teaching of the Christian faith is that holy matrimony is between a man and a woman. The Roman Catholic Church still holds to this definition, as does Eastern Orthodoxy, the majority of Anglican churches worldwide and most Protestant denominations in the United States and elsewhere. A majority of Muslim and Jewish denominations around the world hold a similar definition as well.

At the same time, since the Obergefell decision, the right to marry a person of either sex is the law of the land, which people have built their lives and families around. And there are millions of people in this country who identify as L.G.B.T.Q.: Just over 7 percent of American adults identify this way, with percentages substantially higher among younger adults. Many find Christianity’s historic stance painful, if not destructive.

L.G.B.T.Q. rights versus religious freedom threatens then to become a war of all against all. But it need not be. We must find ways to preserve and protect the civil rights of gay people while also allowing religious people who adhere to historic teachings on sex and marriage to freely practice their faith.

Sustaining pluralism becomes more difficult when we conflate disparate issues or societal clashes — if, say, we completely map the current conflict over gay rights and religious liberty onto civil rights decisions about racial discrimination and Jim Crow. This view assumes that opting out of designing a website for a same-sex wedding is legally and ethically identical to refusing to serve Black customers. We saw a comparison like this in the oral arguments for Obergefell, and I’ve heard it many times since. It equates individuals or organizations who hold longstanding religious beliefs on sex and marriage with white supremacists.

Claims of religious liberty were undeniably used as an excuse for racial discrimination. If the analogy holds between racial discrimination and declining to provide services for a gay wedding, then there is no debate to be had. We cannot “both sides” opposition to Jim Crow.

However, the right analogy is crucial here, and correct distinctions are critical. In order to justify racial violence and oppression, white people in America and Europe essentially invented a novel theology, baptizing white supremacy. It was racism in search of an ethic. Sexual ethics, by contrast, are named and addressed in religious scriptures in specific terms. Unlike white supremacy, religious teaching regarding sex, including prohibitions on extramarital and premarital sex, pornography, lust and same-sex sexual activity have been part of the Christian faith from its earliest days. This is not an aberrant view rooted in bigotry but a sincere belief that flows from ancient texts and teaching shared by believers all over the world.