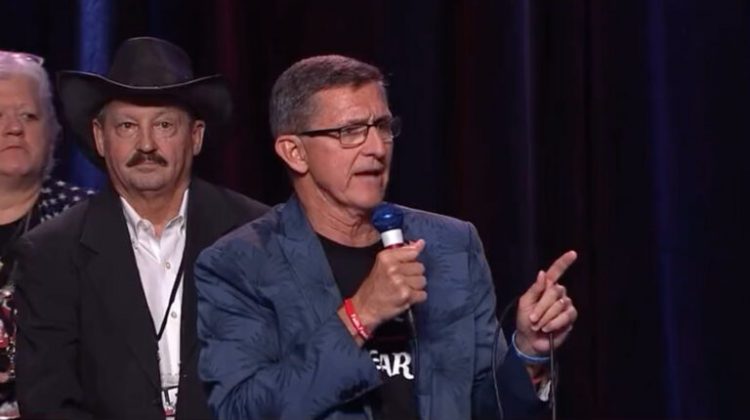 Here is Peter Wehner at The Atlantic:

A prayer at a “ReAwaken America” event in Lancaster County, Pennsylvania, a few days ago, at which Michael Flynn appeared, captured the sensibilities of this moment: “Father God, we come to you in the name of Jesus. We’re asking you to open the eyes of President Trump’s understanding, that he will know the time of divine intervention. He will know how to implement divine intervention. And you will surround him, Father, with none of this deep-state trash, none of this RINO trash. You surround him, people that you pick, with your own mighty hand. In the name of Jesus.”

Flynn, a retired Army lieutenant general who once led the Defense Intelligence Agency, resigned as President Donald Trump’s national security adviser after less than a month for allegedly misleading the vice president, and then pleaded guilty to lying to the FBI. (He later filed to withdraw his guilty plea, insisting that he had been set up by the FBI, and was eventually pardoned by Trump.)

Flynn has been embraced by MAGA world in part because he’s seen as a martyr, the victim of a “deep state” hit job. But what turned him into a rock star on the right was the post-pardon chapter of his life, as the Associated Press’s Michelle Smith points out in the recently broadcast Frontline documentary “Michael Flynn’s Holy War.” It was then that Flynn, whom a former military colleague describes as being susceptible to “extreme thinking”—fully took up residence in a world of fantasy and illusion, of crazed conspiracy theories and disinformation.

Flynn didn’t just claim that the 2020 election was stolen from Trump; he floated the idea of having Trump declare martial law and try to “rerun” the election. He suggested that the president should seize voting machines. And he said that the election involved “probably the greatest fraud that our country has ever experienced in our history.” At an event in Arizona last month, Flynn said, “Did you know that a governor can declare war? A governor can declare war. And we’re going to probably see that.”

Flynn has also asserted that COVID-19 was unleashed intentionally by global elitists in order to “rule the world,” “control humanity,” and “steal an election.” He has warned about the dangers of a “new world order” in which people such as Bill Gates, George Soros, and World Economic Forum Executive Chairman Klaus Schwab “have an intent to track every single one of us, and they use it under the skin. They use a means by which it’s under the skin.”

“It was a surreal moment,” The Atlantic’s Barton Gellman wrote. “Here was a retired three-star general and former national security adviser refusing to opine on the foundational requirement of a constitutional democracy.”

Today, Michael Flynn is building a nationwide, grassroots movement that is fusing deranged political ideas with a mangled version of the Christian faith. In April 2021, the “ReAwaken America” tour was launched by Clay Clark with an event in Tulsa, Oklahoma. For the second event, held at the River Church in Tampa, Florida, that June, Flynn signed on as the star attraction. Organizers claim that more than 10,000 people came to the Pentecostal church for a sold-out show. Since then, the “ReAwaken America” Tour has averaged more than a gathering a month. Charisma News, which is aimed at Pentecostals and charismatics, is a sponsor. (Charisma News describes itself this way: “To passionate, Spirit-filled Christians, Charisma News is the most trusted source for credible news and insight from a charismatic perspective.”)

Tour speakers include a wide range of COVID and election conspiracists—Flynn, Eric Trump, Alex Jones, Mike Lindell, Roger Stone, Sidney Powell, Peter Navarro, Charlie Kirk, and Robert F. Kennedy Jr. among them—and the events are permeated with Christian symbols and apocalyptic visions, the language of spiritual warfare and Christian nationalism. Fears and grievances are stoked, and people are invited to be baptized.

Perhaps the title of this post is wrong. Perhaps Flynn has always been a Christian nationalist, but it took the Trump presidency for him to go public with his views.