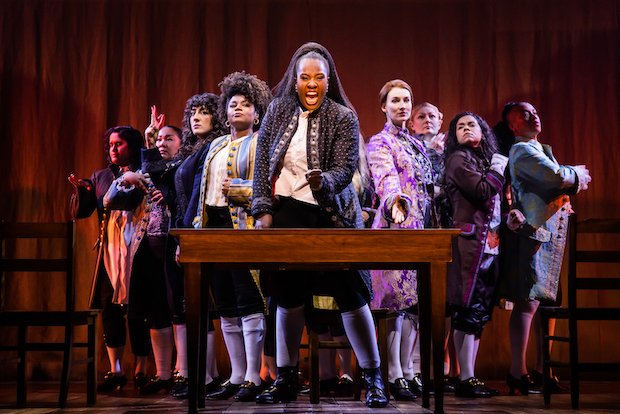 Harvard historian Jane Kamensky has one of the first reviews. A taste:

In May 2019, theater websites reported that Diane Paulus, the artistic director of Harvard’s American Repertory Theater (ART) and a noted Broadway hitmaker, would mount a revival of 1776, to open the following spring in Cambridge. Paulus didn’t know the musical well, but she told me she’d heard it was beloved as a patriotic artifact, something to watch with the kids on the Fourth. Sensing space to probe its tensions more deeply, she planned to foreground what she saw as the latent critique of racism in the original production.

The estates of Edwards and Stone control the rights to 1776 tightly. The book must be performed intact, as it was for Nixon. They authorized one key amendment, a quotation from Abigail Adams’s famed March 1776 “remember the ladies” letter, which might easily have fit the spirit of the original, had it launched just a bit later than 1969. But in general, the text is fixed; the director would have a free hand only with casting and staging.

I teach an undergraduate course on the American Revolution at Harvard, HIST 1776, and arranged for some of my students to fulfill their civically engaged capstone requirement by working as consultants to the ART production in the fall of 2019. While prepping for the class, I first saw the show, in a table read, that August 16—two days, as it happened, before The New York Times Magazine published the 1619 Project as a special issue.

I’d heard rumors that Paulus’s 1776 would feature a cast without men: Founders, but not fathers. It sounded gimmicky. But when the actors walked into the workshop space that summer afternoon, the gimmick walloped me in the gut. This Congresswas female, trans, and nonbinary; Black, brown, and white. The actors were writing “our declaration,” as my colleague Danielle Allen puts it: theirs and yours and mine. I burst into tears. The person sitting next to me, a famous feminist playwright, also sobbed.

Queued outside the restroom at intermission, we shared why we had cried. I said I’d been moved to hear this chorus of voices, from people unimaginable to the men they portrayed, raised in a hymn of complex praise for our beautiful and difficult country. She said her tears expressed longing for a world with no countries at all, like in John Lennon’s “Imagine.”

My students were proud of their work for the production that fall. One of the 1776 apprentices, an athlete who planned to join the Navy after graduation, imagined the circles of impact her research would have as the production toured the barely-United States during the presidential-election season.

The class was slated to see the show in May 2020. But by then, the students had been sent packing. Schools shuttered. Theaters went dark. The eggshell republic cracked further, wedged apart by masks and mandates, and by a president whose favorite Founder is Andrew Jackson. On May 25, George Floyd was brutally murdered on camera in Minneapolis. Millions of Americans took to the streets in rage and agony, protesting the still-lingering afterlife of slavery in the land of liberty, the paradox that had forced the nation’s first great and terrible compromise.

The uprisings fundamentally changed Paulus’s plans for 1776. The company dug more deeply into readings that included the 1619 Project and Ibram X. Kendi’s Stamped From the Beginning. Paulus made the show’s choreographer, Jeffrey Page, her co-director. Together, they made transformative choices, embracing a Brechtian approach that eschewed illusionistic details, including the famous closing fade to the painting of the signers. When it opened, at long last, this 1776 would take place firmly in the now.

I have thought a lot, in the context of this earnest, imperfect musical, about the differences between our moment and 1969, year of wounds, when the dream of the ’60s curdled into Manson and Altamont. When Americans, still reeling from the assassination of Martin Luther King Jr. and Robert F. Kennedy, lurched through the Tet Offensive that escalated their war abroad, and the bombings and protests that brought the war home, as the Weathermen had urged. I comfort myself with the claim—mostly true—that the late ’60s and early ’70s were more perilous, more violent, more fractured than our angrily Roaring ’20s.

Yet we have become, far more than our parents and grandparents, a people as morally confident as we are polarized. On the right, this conviction often expresses as uncritical worship for the founding era—history contorted to cudgel a decadent cultural left. On the left, moral certainty begets condescension to the generations who lived before us, as to those who voted against us. These are but subvariants of the same debilitating virus. As the historian Robert Tracy McKenzie asks in his fascinating recent book, We the Fallen People: “Is part of the problem of American democracy that we Americans think too highly of ourselves?”

Read the entire review at The Atlantic.

Enjoy this video from the 1972 movie: