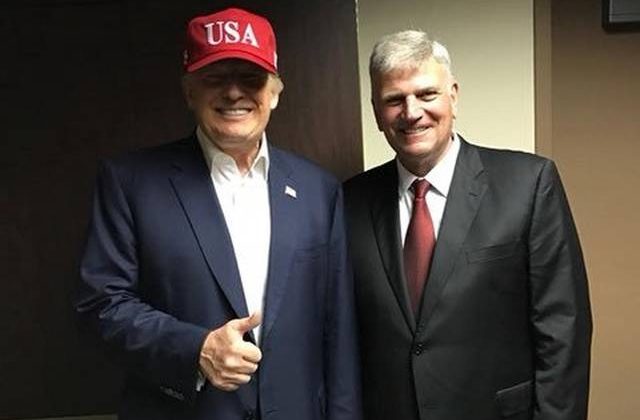 Yesterday Franklin Graham appeared on the Trinity Broadcasting Network to offer his opinion on the FBI’s execution of a search warrant at Donald Trump’s Mar-a-Lago.

Let’s break this down.

00:40ff: The host, Doug McKelway, describes how the execution of this search warrant is exacerbating political divisions in the country. He then asks Graham: “What would Jesus do in a situation like this?” It’s a good question. Unfortunately, Graham has no answers. He says that if Jesus was present to witness the divisiveness of our current moment he would say: “give to Caesar what is Caesar’s.” Frankly, I have no idea what Graham means by this or how he is applying these words of Jesus to what happened at Mar-a-Lago on Monday. Perhaps he means that Christians have a biblical responsibility to obey the government, in this case the Attorney General and the FBI.

But rather than answer the question seriously by trying to offer a brief exposition of the teachings of the Prince of Peace and how those teachings might speak to this current moment, Graham abandons biblical teaching altogether and turns to the founding fathers. “But this is different,” Graham says, “this is our freedom [and it is] being eroded in this country.” Apparently the words of Jesus, whatever Graham means by them in his twisted political theology (if you can call it political theology), don’t matter when American “freedom” is at stake.

Everyone seems to be talking about Christian nationalism these days. This Graham interview is just the latest example of a prominent evangelical turning his back on Jesus and falling into the arms of the founding fathers.

1:40ff: Here we see why some people think Trump has brainwashed the court evangelicals in the way that a cult leader brainwashes his or her followers. Graham thinks that if the FBI would have politely asked Trump for the classified documents the former president would have gladly returned them. Graham seems to actually believe Trump is a good, moral, and upstanding man who would do his civic duty and return these classified documents to the National Archives if only asked. It is worth noting here that the FBI, under the leadership of Trump appointee Christopher Wray, has made several previous requests to obtain these documents from Mar-a-Lago.

Franklin Graham sounds like his father here. During Watergate Billy Graham stood by Richard Nixon until the very end because he believed that Nixon would eventually do the right thing.

1:50ff: Here Franklin Graham repeats talking-points from the statement Trump issued following the FBI operation at Mar-a-Lago on Monday. He believes that the United States government is weaponizing new FBI agents (to Graham, as we will see below, these agents might as well be the Gestapo or the KGB) to threaten the civil rights of law-abiding Americans. He repeats the Trump claim that the execution of the search warrant at Mar-a-Lago was a political move by Democrats to prevent Trump from running for president in 2024. At this point Graham is little more than a Donald Trump spokesperson. This is what court evangelicals do. I wouldn’t be surprised if Trump himself asked Graham to make this appearance on Trinity Broadcasting Network in order to keep the outrage machine running. Trump thrives on chaos and victimhood. He uses evangelicals like Graham as his agents of propaganda.

2:10ff: Graham essentially compares the FBI’s execution of this warrant to the KGB during the Soviet Union. This is what I mean by the politics of fear. Merrick Garland a socialist? Joe Biden a socialist? These are buzzwords to rally the base. It is disgraceful to see an evangelical minister like Graham, who does such good relief work with Samaritan’s Purse, succumb to this kind of fearmongering.

2:40ff: Graham calls Christians to run for office. What he really means is that he wants members of the Trump cult who baptize their political views in the name of Jesus to run for office. I think Franklin Graham would love to fill Congress with more politicians like Marjorie Taylor Greene and Ted Cruz.

3:05ff: When Graham says that the nation is too politicized and we need to repent of our sins he really means that the Democrats are destroying the country and they need to repent of their sins. Graham would probably reject this interpretation of his words, but there is no other way of interpreting them in the larger context of this interview.

3:21: Graham says the answer to our problems is God. This is the conservative evangelical response to any American crisis–more God, more revival. Here Franklin Graham has learned the lessons his father taught him. But this kind of language, while perhaps true, is an excuse to avoid deep Christian thinking about democracy, American pluralism, how the American past connects to the American present, foreign policy, systemic racism, gun laws, etc. My daughter and I were recently talking about how the 20th-century theologian and public intellectual Reinhold Niebuhr responded to these easy solutions to complicated problems. We made a TikTok about this the other day:

The Niebuhr quote in this video comes from this 1958 interview with Mike Wallace (starting at the 10:50 mark). It’s worth a look:

4:15ff: Graham suggests that the evidence presented by the House’s January 6 committee is merely an attempt to discredit Trump. I think a lot of conservatives in Washington know that the evidence presented by the January 6 committee is true. They just won’t admit it because it would hurt them politically. Instead they attack the process. But I get the sense that Graham actually believes that all of the material presented about Trump’s refusal to accept the election results and the former president’s role in inciting the insurrection is a lie propagated by a deep state that is doing the bidding of Satan.

4:53ff: I often hear Graham say that it is important to pray for our leaders. Yet in this video he calls upon the viewers to pray for Trump, a man who does not hold office. Now, of course, Christians should pray for everyone, whether they hold office or not, but Graham does not once say that Christians should pray for Joe Biden, Merrick Garland, or anyone else currently holding a leadership position and doing their best to uphold the law. I guess Jesus’s command to pray for our enemies doesn’t apply to Democrats.