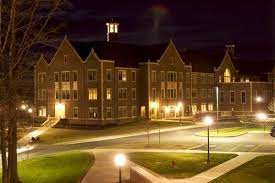 Muckraker (in the best sense of the word, e.g. Upton Sinclair) Warren Throckmorton has exposed some anti-Christian tendencies in an economic theorist who is apparently a “saint” at Grove City College. For those who don’t know, Throckmorton teaches psychology at Grove City. As you will see, these tweets are part of the ongoing debate over wokeness at the college.

Nick Freiling, an alum of the Grove City Economics Department, responded with a public letter:

We, the undersigned students and friends of the GCC Economics Department, vehemently reject the idea that GCC economics professors and curriculum are, or were ever, anti-Christ.

We sign this letter to show our support for the GCC Economics Department and its historic commitment to sound, Biblically-rooted economics.

Austrian, “Mises-ian,” and/or free market economics are not anti-Christian, regardless of the diverse religious views of its many thousands of practitioners around the world. In fact, there is perhaps no more thorough treatment of this subject than that found in GCC professor Dr. Shawn Ritenour’s own book — a 564-page foundational textbook in several GCC economics classes.

So far seven former alums have signed the letter.

This entire anti-wokeness episode at Grove City College is exposing the absurd nature of the Christian Right’s larger attack on critical race theory. One must ask: Why does the Board of Trustees feel the need to prohibit the teaching of critical race theory and not, for example, capitalism, libertarianism, republicanism, the classics (or as the ancient Christians called them “pagans”), the French Enlightenment, Thomas Paine, etc….? I am usually opposed to the practice of reducing every problem to race (or any other identity category for that matter), but it is hard to see this any other way at Grove City.

And then there is the case of board member Anne McClellan. She was a member of the board committee investigating “wokeness” at the college. Anne and her husband Tim attend Christ Church in Cary, North Carolina. Tim is one of two elders at the church.

Christ Church is no ordinary conservative evangelical church. The church that the McClellans attend have a statement on “biblical absolutism.” It reads:

The Bible is absolutely authoritative, and is the ultimate authority of our thinking. When we say “the Bible” we mean the whole Bible, both Old and New Testament. We seek to understand and submit to the entirety of Scripture, even the parts that secularists and liberals dismiss, including all the sweet parts and the ugly parts and confusing parts. We view the Bible’s language of symbol, poem, and story as God’s way of teaching us how to interpret the world. We maintain that a properly ordered society will have the Bible at its center.

The church also has a statement of “presuppositional thinking”:

According to Romans 1, all men are insane, living in fantasy worlds of their own imaginations. The Bible is given to bring us back to sanity and reality. All ideas have “shipping labels” on them and thus we must be constantly aware of our own prejudices and presuppositions when it comes to discerning truth. We desire to jettison all pagan and semi-Christian thought, tear down every idol, and ground every thought on Biblical principles.

The church also has a statement of “Biblical Theocracy”:

We affirm the crown rights of King Jesus over every area of life. 2 Timothy says “all Scripture is profitable . . . for instruction” (2 Timothy 3:16), we believe that all the Scriptures, including the books of Moses, are given for instructing all areas of life, including national life. While we are sympathetic to the theonomists and value many of their works, we build on their foundation with a fuller and more robust view of the Church, her position in the world, and her own need for reformation in our day. We believe that before we can reform our local or national governments we must first reform church government. The theocratic reign of Jesus must first be realized and manifested in the church.

The church also has a statement on “Optimistic Theocracy”:

We hope in the slow, gradual, cumulative, yet pervasive growth of the Kingdom of God throughout all the world. From the time of Jesus to today, the Kingdom has not stopped expanding, in spite of trials and setbacks and persecutions, eventually all nations will belong to King Jesus. We affirm the Biblical promises of Christ’s victory on earth and in human history.

Christ Church in Cary is associated with Moscow, Idaho pastor Doug Wilson’s Christ Church. Back in December 21, 2021, Wilson asked whether Grove City has some “worrisome spots” on “her lymph nodes.” He appears to have played an important role in spearheading the anti-woke crowd.

But to be fair, there is evidence that Anne McClelland may not agree with Wilson or the various statements from Christ Church–Cary I quoted above. After all, as Vice President of Research for XaaS Channel Optimization, TSIA, she aspires to:

In this video, she seems to be part of a conversation on racial diversity (she is in the lower right box).

But there is still more to this story. Tim and Anne McClellan founded a classical Christian school in Cary associated with Christ Church. Back in 2004 they got into some trouble:

The headline comes from the Raleigh News and Observer from December 9, 2004:

Students at one of the area’s largest Christian schools are reading a controversial booklet that critics say whitewashes Southern slavery with its view
that slaves lived “a life of plenty, of simple pleasures.”

Leaders at Cary Christian School say they are not condoning slavery by using “Southern Slavery, As It Was,” a booklet that attempts to provide a
biblical justification for slavery and asserts that slaves weren’t treated as badly as people think.

Principal Larry Stephenson said the school is only exposing students to different ideas, such as how the South justified slavery. He said the booklet is
used because it is hard to find writings that are both sympathetic to the South and explore what the Bible says about slavery.

The booklet isn’t the only connection its two co-authors have with the school.

One of the authors, Douglas Wilson, a pastor in Moscow, Idaho, wrote a book on classical education upon which the school bases its philosophy.
Wilson’s Association of Classical and Christian Schools accredited Cary Christian, and he is scheduled to speak at the school’s graduation in May.
Some school leaders, including Stephenson, founded Christ Church in Cary, which is affiliated with Wilson’s Idaho church.

The booklet’s other author, Steve Wilkins, is a member of the board of directors of the Alabama-based League of the South. That is classified as a
“hate group” by the Southern Poverty Law Center, an Alabama-based civil rights group.

Potok said people who argue that the South should secede again have latched onto the writings of Wilson and Wilkins, which portray the
Confederacy as the last true Christian civilization.

At a time when a number of Triangle Christian schools have lost enrollment and even closed, Cary Christian has seen rapid growth since it opened in
1996.

The school has 623 students in kindergarten through 12th grade. With a relatively low tuition — up to $5,000 — it has attracted families from 55
churches. At least one parent must be a regular attendee of a church.

Stephenson said the school’s growth is based on parental desire for a classical education founded on the basics of phonics, grammar, logic and
rhetoric. Students read many classics, such as the writings of Plato and Socrates.

“As a classical Christian school, we think it’s important for our students to be able to think and not be slanted to a particular position,” Stephenson
said. “We want them to think for themselves.”

Until two years ago, Stephenson said, middle school students also had read excerpts from “Southern Slavery.” He said the booklet was a
counterpoint to “Uncle Tom’s Cabin,” which he said portrayed all Southern whites as treating their slaves badly.

Once the Civil War was no longer taught in middle school, Stephenson said, Cary Christian stopped using the booklet in those grades.

But the 43-page booklet is still read in its entirety by ninth-graders when they study the Civil War. Stephenson said the booklet can help students
formulate arguments when taking the pro-Southern side in debates.

“A student may be assigned an opinion they may not agree with, so they will understand both sides,” Stephenson said.

Angela Kennedy, whose daughters have attended Cary Christian since 1996, said all the booklet does is help students learn about both sides so that
they have a basis to form their own opinions. She pointed out that the students also read Abraham Lincoln’s speeches.

“They really do get both sides of the story,” Kennedy said. “In public schools, all they get is one side of the story. That’s not education. That’s
indoctrination.”

Stephenson said the booklet is discussed for two days. Even as they read the booklet, he said, students are told slavery was wrong.

“Slavery is wrong,” Stephenson said. “That’s not debatable about slavery. The South was wrong about the slave trade.”
Parent’s support

Marcus Ranch, who has three daughters at Cary Christian, said he has no problem with the school using the booklet. He said it offers an accurate
portrayal that is overlooked of how many slaves were treated kindly by their owners.

“That book is fine,” Ranch said. “It does a good job with that particular perspective.”

But Potok questioned how the school can use a booklet that asserts that slavery “was a relationship based upon mutual affection and confidence.”
“What these men have written is an apology for slavery,” he said. “They’re putting window dressing on an abhorrent institution.”

Potok also blasted the booklet, which was published in 1996, for plagiarizing a previous work. The booklet has received criticism from a number of
historians.

Wilson declined to comment and referred questions to his assistant, Mike Lawyer. Lawyer said the booklet has been pulled from publication because
of faulty footnotes and citation errors.

Lawyer said he thinks few schools use the booklet, which is published by a company owned by Wilson’s Idaho church.

But Lawyer said the authors stand by their central belief that the Civil War didn’t have to happen and that slavery would have ended on its own.

But the use of the booklet is leaving some area pastors concerned that it could promote intolerance.

“If there’s any attempt to divide us, it’s totally un-Christian,” said Richard Dial, pastor of Cary Church of God.

Mike Woods, administrator of Wake Christian Academy, said he couldn’t see his school using “Southern Slavery, As it Was,” especially with younger
students.

“It’s so easy for some of them to take something they read and assume you’re in favor of it,” he said.

One is left wondering whether Anne McClelland was really an objective and independent member of a Grove City College Board of Trustees study on wokeness.

On the same day as the News and Observer article quoted above, the school issued the following press release on letterhead:

As you may be aware, today the News and Observer published a rather negative article about Cary Christian School and our use of a small booklet supplement entitled, “Southern Slavery, As It Was”. Within the article it stated, “the booklet has received criticism from a number of historians and that it has been pulled from publication because of faulty footnotes and citation errors.”

We were unaware of these findings and as a result have already pulled this booklet from our curriculum. Let us reiterate that it is always our goal in the secondary grades to present two sides of an argument. At no time has slavery ever been condoned in our curriculum. As Mr. Stephenson stated within the article, “Slavery is wrong, that’s not debatable. The South was wrong about the slave trade.”

We apologize for this oversight and covet your prayers for our school.

Here is a link to Wilson and Wilkins, Slavery as it Was.