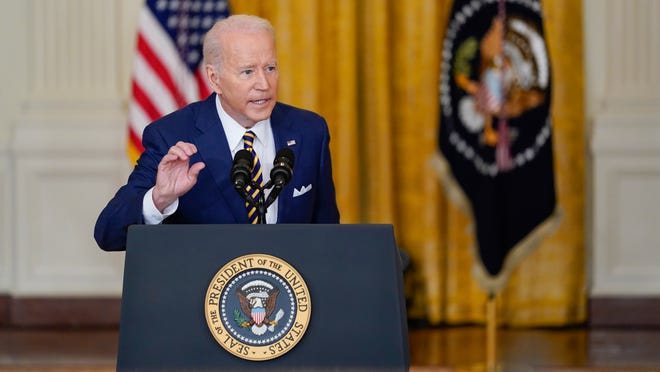 The reports on Joe Biden’s press conference yesterday are pretty predictable. A Fox News headline called it a “total disaster.” The New York Post called is an “utter disaster.” The New York Times reported on the event with little overt commentary one way or the other. The Hill commented on how Biden’s “loquaciousness” got him into trouble. Several outlets noted his botching questions on Ukraine. Kurt Bardella of The Los Angeles Times believes that Biden’s accomplishments in the first year of his presidency “have been short-changed.” The New Republic summarized the press conference well with a headline reading, “Biden Finally Lets Loose , in All His Messy Glory.”

Over at The Washington Post, Jennifer Rubin called Biden a “glass half full” president. I think that’s right. Frankly, I think he’s done a pretty good job in his first year as president. Many Americans have benefited from his COVID-19 relief package. He did a good job on the vaccine rollout. It is not his fault that nearly 40% of Americans won’t take it. Yes, there have been some bumps along the way on COVID-19, but let’s also remember that Biden inherited a train-wreck from Trump on this front. I am excited about the roll out of the bipartisan infrastructure bill. It will improve the lives of millions and millions of Americans. I am also optimistic that some aspects of Build Better Back Better may still get passed as individual pieces of legislature. The economy is improving. We are not there yet, but unemployment rates are falling and there is hope things will get even better once we get COVID-19 under control. We are back in the Paris climate agreement.

Of course there have been some low points. The Afghanistan withdrawal did not go well. We are still dealing with inflation and supply chain issues. Many Americans are confused about how to respond to Omircon. Our immigration system is still a mess.

And that was only Trump’s first year in office. His two biggest achievements were a $1.5 trillion dollar tax cut and the appointment of Neil Gorsuch to the Supreme Court.

We sometimes forget in our age of grade inflation that a “B” means “good.”