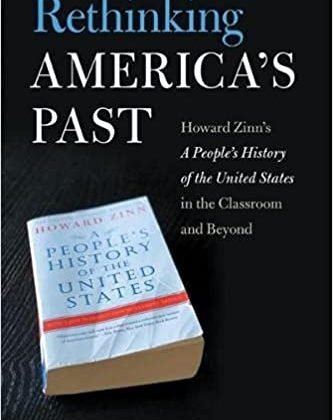 As longtime readers of this blog know, I have my issues with Howard Zinn‘s A People’s History of the United States. I stand by what I have written about this book over the last decade or so. We’ve covered him a lot here at The Way of Improvement Leads Home.

A recent study by Robert Cohen and Sonia Murrow suggests that Zinn’s left-leaning narrative of American history has not made students “hate America” like some conservatives have claimed. Here is a taste of their piece in The Nation:

The spurious justifications conservative politicians have offered in 28 states for banning Critical Race Theory, the 1619 Project, and candid discussion of the history and the persistence of racism in America leave us with a strong case of déjà vu. Why? Because, in researching America’s reception to Howard Zinn’s A People’s History of the United States (1980), we found the same arguments used by anti-radical activists as they sought for years to ban from public schools and universities Zinn’s best-selling iconoclastic introduction to the American past. Both in the 1980s with Zinn (through his death in 2010) and today with Critical Race Theory and the 1619 Project, the book-banners claim that exposing students to critical history will teach them to hate America and that such exposure is divisive and so disrupts the educational process.

Our research reveals the groundlessness of these justifications for banning dissenting approaches to the American past. There is a mountain of evidence in Zinn’s papers, housed at New York University’s Tamiment Library, that both students and teachers found that exposure to critical history enhances the historical teaching and learning process. Zinn’s People’s History was for many high school students the first historical account they had ever read that foregrounded the role of racism, imperialism, militarism, sexism, and class conflict in the American past. Zinn’s book offered for many a stunning contrast to their blandly upbeat and conventional US history textbooks and was also distinctive in the extensive treatment it accorded to dissident movements, valorizing the role that abolitionists, feminists, labor organizers, anti-war activists, and other social critics played in the struggle to make America a more democratic and humane society.

Students found it stimulating to compare Zinn’s unconventional view of American history with that of their stodgy textbooks and to ponder whether the evidence Zinn offered was sufficient to refute the nationalistic, American exceptionalist assumptions upon which they had been raised. Many of the letters high school students wrote to Zinn expressed admiration for his work and credited him for teaching them to look at American history in a new way, and to realize for the first time that history was not a trivia game where one memorized and regurgitated names and dates, but instead involved deep thought in which evidence and reason needed to be used to assess conflicting interpretations of the past.

Divisive? It is certainly true that some of the more conservative students did not agree with Zinn’s leftist perspective on the American past. But one can tell from the letters they wrote to Zinn that these conservative youths were learning a great deal by debating Zinn’s views, for example, insisting that industrialists such as Carnegie were economic innovators and not merely the callous oppressors of labor that Zinn depicted. Such disagreements are a central part of historical discourse. Barring them from classrooms on the grounds that they are “divisive” is a prescription for intellectual impoverishment and boring classrooms that disconnect students from the very arguments that make history intellectually engaging.

I still think historian Lendol Calder offers the best way of using Zinn in the classroom. I also still think Georgetown University historian Michael Kazin has offered the best assessment of Zinn’s work. Sam Wineburg’s take on Zinn is also worth reading. (In order to understand the debate over Zinn, read Cohen’s response to Wineburg).