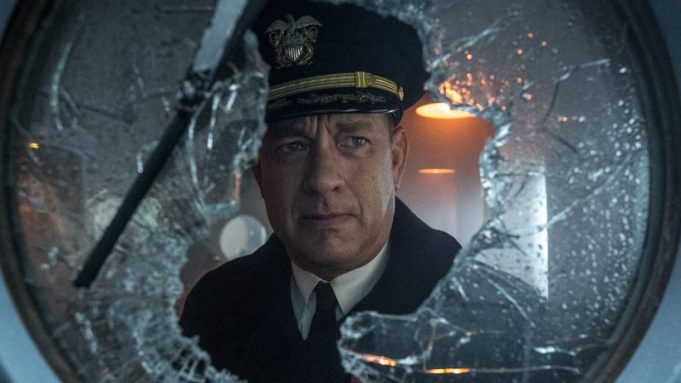 “I have the conn,” the captain of a World War II warship informs his lieutenant. “Captain has the conn,” the lieutenant announces. The control in his hands, the captain launches a series of endurance-testing split-second decisions that will end in survival or disaster. Waves crash over the bow as the ship lists at an oblique angle to out-maneuver a German submarine. The U-boat seems to be retreating but no noise from the “screws” (propellers) registers as the sonar pings a lonely beat. Suddenly the sonar technician shouts, “Overrevving screws, sir. He’s trying to slip under us!” The captain orders the release of the depth charges, which explode in rapid succession, shooting geysers of water into the air. Then silence. As the captain announces that the U-boat has escaped, the lookout cries, “Oil!” After surveying the damage, the captain affirms to the crew, “We got him.” Cheers erupt from every corner of the ship. The captain radios, “We have sighted evidence of a kill.”

Greyhound, directed by Aaron Schneider and starring Tom Hanks, depicts the Battle of the Atlantic from the vantage of the captain of a warship. The availability of Greyhound on July 10, 2020 on Apple TV+ might have escaped the radar—or sonar—of viewers, given the real-world life-and-death events of the last twelve months. The pandemic had caused Sony Productions to cancel the movie’s planned release to theaters. Many now have the chance belatedly to view the movie. For aficionados of an array of genres—submarine movies, war movies, WW II movies, warship movies, movies with battle scenes, seafaring movies, action movies, Tom Hanks movies, movies based on novels, historical movies, or movies pure and simple—Greyhound is required viewing. Yet the movie’s importance extends further than this, as we ourselves navigate powerful currents in our own time.

Filmed on the real surviving Fletcher-class destroyer, the USS Kidd, now a Baton Rouge museum on the Mississippi River and a National Historic Monument, Greyhound is based on the novel The Good Shepherd (1955) by C. S. Forester. The movie follows the travails of Navy Commander Ernest Krause (played by Hanks) aboard the USS Keeling, radio call sign or codename “Greyhound.” Defending a convoy of Allied merchant ships headed to Liverpool, Krause commands an escort of destroyers comprised of his own “Greyhound,” the British “Harry,” the Polish “Eagle,” and the Canadian “Dicky.” Having to cross the “Black Pit,” miles of ocean where air cover ceases for days before they are back in range, the ships encounter, after the single U-boat in the scene above, a wolfpack of six submarines. In World War II even supply missions came under deadly attack. As the movie poster for Greyhound reads: “The only thing more dangerous than the front lines was the fight to get there.” Besides a brief opening scene with Krause’s love-interest back home the entire plot involves naval battles and maneuvers, with little attention paid to anyone except Krause.

The camera’s focus on Krause also seems to distance Greyhound from the best submarine and other seafaring films. Captains usually draw much attention—some triumph, some falter, some go rogue, some go insane—but so do others in the ship’s company. A submarine or ship creates a microcosm of society. Narrowing the aperture foregrounds the individual in relationship with others and underscores enduring questions about the human condition.

If we fast-forward from wartime and the maritime to our time and the mainland, the focus on the Tom Hanks character might raise a red flag. Eighty years removed from the events of Greyhound we have experienced firsthand the costs of the agonistic individualism of modern American life. The late 20th century brought a focus on the individual self at the expense of commitments to any entity outside the self. Must we now have it so even in our depictions of our World War II heroes?

Only upon reflection does the cumulative effect of this understatement, easily dismissed as undeveloped characterization, become felt. It then becomes clear that the focus on the captain emanates from the very opposite of the self-focus of modern American individualism and the therapeutic consumer culture, which renders all of human experience, on the part of a person or a corporation alike, a quest for self-interest under the guise of well-being. Even if the camera seeks something more, it encounters only a kind of Stoic inwardness. The captain’s inner life is just that.

Our decisions, whether in a crisis or on an ordinary day, reflect a particular philosophy of living, whether conscious or not. They set the stage for what we do and how we interpret what we do. They also show us the realm of possibilities we can and cannot—should and should not—take and the reasons why. The place where we work this out is our inner life.

In recent years, signs of a resurgence of interest in the ancient Greco-Roman philosophies suggest many Americans seek deeper meaning in their lives. The new Stoicism, for example, has self-conscious adherents. Some attempts to understand and apply the teachings of ancient Stoics like Epictetus and Marcus Aurelius have much promise. Others distort it—influenced more by the therapeutic unleashing of the self’s every impulse the new Stoicism seeks to counter—into a vicious warrior mentality no ancient Stoic would recognize.

Greyhound shows us what the principled application of Stoicism to a person’s life might look like, even in wartime situations demanding not only strength but power. Krause could be dismissed as bland or lackluster, but that misses a form of heroism scarce in late twentieth- and early twenty-first century American life—pre-pandemic, at least. Though the movie was produced before essential worker became an essential title, it speaks to the courage and resilience of those losing and those saving lives in the world crisis we face.

Greyhound, whose screenplay was written by Hanks, exhibits even more than the ancient Stoics’ focus on emotional control, resolve, discipline, and resilience. Whether intended or not, the movie takes us further, hinting at ancient Platonism’s emphasis, above all, on moral goodness as the highest value, making it the school of thought that attracted everyone from St. Augustine to Martin Luther King, Jr. Krause prays. He has the messenger repeat a radio communication just to add the words “thank you.” When the ship’s cook offers him a plate of food after the grueling scene above, he requests him to “take it to Lieutenant Cole. I bet he’s worked up an appetite.” And when a seaman congratulates him on the fifty Germans killed in the explosion of the U-boat, the captain answers, “Yes. Fifty souls.”

Elisabeth Lasch-Quinn is Professor of History at Syracuse University and Senior Fellow at the Institute for Advanced Studies in Culture at the University of Virginia. She is the author of numerous essays and books including, most recently, Ars Vitae: The Fate of Inwardness and the Return of the Ancient Arts of Living (Giles Family Fund Recipient, Notre Dame, 2020), a study of ancient philosophy and modern culture.