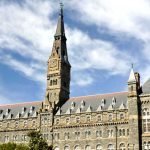 Over at Commonweal, Massimo Faggioli wonders if Catholic universities are “positioning and marketing themselves as part of the mainstream liberal-progressive realm of higher education.” Here is a taste of his piece: …Student enrollment is trending down, for a variety of reasons—from […]

In my post on the firing of Taylor University philosophy professor Jim Spiegel, I wrote: Should he be fired for “Little Hitler”? I can’t answer that question. I would need to know more about the local culture on campus at […]

James Ceaser, a professor of politics at the University of Virginia, makes some important points about intellectual inquiry in this piece at The National Review.  I found this section useful: Begin with higher education, the institution traditionally charged with presenting […]

Yesterday in Created and Called for Community we read an excerpt from John Henry Newman‘s “What is a University,” a chapter in his 1852 book The Idea of a University.  Newman wrote this book while serving as rector of Catholic […]

Earlier this morning I wrote about the matchup between these two faith-based football programs.  Here is a much better piece than the one to which I linked.  Deseret News writer Ethan Bauer talked to Liberty University president Jerry Falwell Jr., controversial […]

It should be an interesting Saturday in the world of sports. # 10 Hope College plays # 3 Calvin University in the championship game of the Michigan Intercollegiate Athletic Conference.  The winner gets an automatic bid to the NCAA […]

Due to a few things going on in my life right now, I have been thinking again about Mark Schwehn‘s book Exiles from Eden: Religion and the Academic Vocation in America.  This book has been very influential in the way I […]

This is an important post for those of us in church-related academia, especially administrators.   Jonathan Wilson discusses his experience as an adjunct history professor at the Jesuit-run University of Scranton, but his thoughts apply to any faith-based institution or any college […]

Jacobs is responding here to Rod Dreher’s post at The American Conservative.  I was struck by this paragraph in Jacobs’s response: I’m not exactly a pollyanna about these matters. I have said over and over again that, thanks to my long career […]

On Tuesday, we posted about the recent Pew Research Center survey that suggests most Republicans have a negative view of higher education.  Over at the Pietist Schoolman, Chris Gehrz has some “quick thoughts” on this survey and what it might […]

Over at The Pietist Schoolman, Chris Gehrz has the answers. Here is a taste: In 2013 I parsed some data from The Chronicle of Higher Education to see how well evangelical college and university presidents were paid. Since the Chronicle just released an updated version of the […]

Kenneth Starr was fired as president of Baylor University in May 2016 for his poor handling of a rape and sexual assault scandal on campus.  He has finally been replaced. The new president of Linda A. Livingstone. Here is a […]

I want to call your attention to a nice piece at Inside Higher Ed on Christian colleges and political diversity.  It is written by Thomas Albert (Tal) Howard, a historian at Valparaiso University in Valparaiso, Indiana and former director of the honors […]

It’s good to have Chris Gehrz, aka “The Pietist Schoolman,” back from Europe and blogging again. In this post he explains why Jerry Falwell Jr. should not get anywhere near American higher education. Here is a taste: On Tuesday Jerry […]

It was only a matter of time.  As I watched this tragic event unfold over the last couple of weeks, I did not see any other possible ending.  If you are new to this controversy check out our previous posts […]

We have already done several posts about the controversy at Mount St. Mary’s University in Emmitsburg, Maryland.  You can get up to speed here.  When we last left the Mount the faculty had asked president Simon Newman to resign.  Newman […]

I don’t know how many of you have been following what is going on at Mount St. Mary’s University, but you can get up to speed here. The faculty at The Mount have given president Simon Newman until tomorrow morning, […]

But it is not clear whether they will come back as long as Simon Newman remains president of the university. This article in Inside Higher Ed explains everything.  Newman is trying to extend an olive branch, but for many at The […]