Christian America; "Was America Founded as a Christian Nation" Book

On April 21, 2016, Annette Gordon-Reed and Peter Onuf appeared at the Free Library of Philadelphia to talk about their new book , Most Blessed of the Patriarchs: Thomas Jefferson and the Empire of the Imagination.  It is a great book....

Was America Founded as a Christian Nation? “The Founding Fathers and Religion: Introduction” [youtube https://www.youtube.com/watch?v=cd358c1A85o]...

I had a great day yesterday with the group of teachers who registered for my Messiah College’s Center for Public Humanities “Teachers as Scholars” seminar on religion and the American founding.  The Center, which is funded by the National Endowment...

In the wake of David Barton’s appearance on The Daily Show a couple of weeks ago (see our 9-part analysis of the appearance), Jon Stewart invited Richard Beeman, an award-winning history professor at the University of Pennsylvania and an expert […]

As many of my readers know, David Barton’s appeared on Jon Stewart on Wednesday night.  I have received a lot of e-mails and Facebook notes from readers of this blog asking me to respond to the show, so over the […]

There is a nice debate going on over at First Things on the religious beliefs of the founding fathers. Joe Carter initiated the discussion with a post on David Holmes’s criteria for evaluating the religious lives of the founders. Some […]

I like doing research. I like writing. I like the creative process. But I don’t like responding to the changes made to the manuscript by the copy-editor. For those unfamiliar, this requires checking footnotes, double-checking sources, and a bunch of...

Over the last several weeks I have been trying to arrange speaking engagements in evangelical churches. Let me explain. I wrote Was America Founded as a Christian Nation: A Historical Introduction for Christians. Though the book will benefit Christians and […]

1:05: Wood on Charles Beard and the Progressives: He agrees with Beard that the Constitution was an aristocratic document, although he discredits other dimensions of Beard’s view. Indeed, Wood did affirm a Beardian view in The Creation of the American […]

CNN Belief Blog is running a short post by Boston University religion professor Steven Prothero on writer Jana Riess‘s attempt to “tweet” her way through the Bible. Here is a taste: Riess…has been going at it (@janariess) one chapter a... 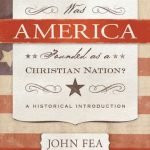 I like how it turned out. Here is the table of contents. Due out in February, but available for pre-order.

Its not due out until February, but you can pre-order at Amazon for the low, low price of $19.77. We are still waiting on cover art.

This is a timely book that will help make sense of one of the most important divides in American politics. John Fea does more than simply point out the shortcomings of arguments on either side of the debate over Christian […]

John Fea has produced a carefully balanced and thought-provoking addition to the long-running debate about the role of religion in America’s founding. It’s particularly strong in its treatment of the anti-Catholicism of some of the founders. Ira Stoll, author of […]

This is a book for Christians who want a credible account of how religion affected the settlement and founding of the United States. It brings out the indisputable importance of religion without claiming more than sound historical scholarship can support. […]

This book is must reading for everyone interested in the question of America’s Christian origins–especially for those who think they already have the answer. Well-researched and up-to-date, it is full of timely wisdom on a topic far more complicated than […]

With careful research and judicious scholarship, John Fea has produced a remarkably useful guide for navigating the arguments about America’s “Christian” origins. His reluctance to dictate conclusions is a measure of his evenhandedness. Randall Balmer, Barnard College, author of God […]

Today’s endorsement comes from Mary V. Thompson, Research Historian at Mount Vernon and author of In the Hands of a Good Providence: Religion in the Life of George Washington (University of Virginia Press, 2008). In his latest book, Was America […]

This endorsement comes from Scot McKnight, Karl A. Olsson Professor in Religious Studies at North Park University in Chicago. Very few writers can take a complex subject—200+ years of history with bewildering, bemoaning and belligerent claims by Americans about whether […]

Today’s endorsement for Was America Founded as a Christian Nation: A Historical Introduction comes from Stanley Hauerwas, the Gilbert T. Rowe Professor of Theological Ethics at Duke University Divinity School and the man who Time Magazine named in 2001 as […]