This graph is from a June 2020 survey from the Public Religion Research Institute: Here is Dawn Araujo-Hawkins at The Christian Century: Two days before Rusten Sheskey, a White police officer in Kenosha, Wisconsin, fired seven shots into the back […]

John Nichols, writing at The Nation, is on the mark: Donald Trump and his partisan wrecking crew jetted into Kenosha Tuesday on a political mission. That was no secret. The president spelled everything out in his acceptance speech at last week’s Republican […] 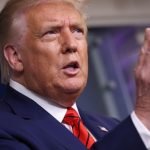 Monday, August 31, 2022, in Trumpland began with news that House Minority Whip Steve Scalise, a Louisiana Republican and Trump supporter, doctored a video to make it appear that Biden wants to defund the police. I am expecting Scalise’s GOP […]

“The most basic duty of government,” Trump said at the 2016 GOP convention, “is to defend the lives of its own citizens. Any government that fails to do so is a government unworthy to lead.” How should we think about […]

Well, it’s over. Last night Donald Trump, a president who lost the popular vote by 3 million and has never had his approval rating rise over 50%, used the White House–the “people’s house–for a political rally. Most of the sycophants […]

Here is what the Bible-believing, born-again Christians who support Donald Trump are saying today: Let’s start with the Liberty University Falkirk Center crowd: Charlie Kirk believes that the Democrat concern over racial unrest and racial justice is politically motivated: Isn’t […]