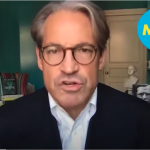 Get up to speed here. Yesterday, we posted about Eric Metaxas’s veiled references on his radio show to the punch he threw at an anti-Trump protester last Thursday night in Washington D.C. Today, Metaxas used Twitter to share an article […]

It was a rough week for conservative evangelicals in the United States. The president of the largest Christian university in the country resigned after a sex scandal. A popular evangelical radio host and author was caught on tape punching an […]

Donald Trump had some things to say about Christianity and “faith” during his GOP convention acceptance speech on Thursday night. Emily McFarland Miller and Jack Jenkins have it covered at Religion News Service. Here is a taste: Nearing the end […]

I got back from teaching today and learned that court evangelical Eric Metaxas, after a night at Trump’s court, threw a punch at an anti-Trump protester on a bike and then backpedaled away. Warning: The protester is using some pretty […]

Well, it’s over. Last night Donald Trump, a president who lost the popular vote by 3 million and has never had his approval rating rise over 50%, used the White House–the “people’s house–for a political rally. Most of the sycophants […]

Here is what the Bible-believing, born-again Christians who support Donald Trump are saying today: Let’s start with the Liberty University Falkirk Center crowd: Charlie Kirk believes that the Democrat concern over racial unrest and racial justice is politically motivated: Isn’t […]

Yesterday was my first day of face-to-face teaching since March. I am not yet in “classroom shape,” so I was exhausted by the end of the day. Mentally, I was still reeling from multiple technology failures (mostly due to my […]

I didn’t get to listen very carefully to many of the speeches on night 2 of the GOP convention. I was preparing for my return to the classroom today.  At least my nightmares were different last night. Instead of dreaming […]

Short answer: They loved it. Jack Graham retweeted several speeches. In the end, he summed it up this way: One Nation Under God. — Jack Graham (@jackngraham) August 25, 2020 I don’t think I was watching the same convention as […]

Here is Jerry Falwell Jr. delivering his “Osama, Obama, and Your Mama” speech at the 2016 Republican National Convention: [youtube https://www.youtube.com/watch?v=ST7ucO2aIjU&w=560&h=315] The New York Times is reporting that Falwell was not back for the 2020 convention. Here is Glenn Thrush: […]

Things seem to be business as usual in Trumpland. Last night we learned that Donald Trump’s sister, retired federal judge Maryanne Trump Barry, had some choice things to say about her brother. Let’s be clear. She didn’t say anything […]

This is a screenshot from Fox News: Jared Kushner will also be speaking. By the way, other confirmed speakers include: Nick Sandman The St. Louis couple who wielded guns at Black Lives Matter protesters. The following GOP figures will NOT […]

Trump seems desperate after the wildly successful DNC convention. Granted, Biden and his team did not have to do any magic tricks to define themselves over and against Trump. The bar was pretty low. The Biden campaign claims to have […]