Below is what amounts to the video version of this piece and this piece. This event occurs in a church. It is court evangelical Jack Hibbs’s Calvary Chapel of Chino Hill. This is essentially a pro-Trump political rally. During the […]

Last December I wrote a post titled, “Wayne Grudem lives in a different moral universe than I do.” Grudem’s recent interview with World magazine has not changed my mind one bit. Here is Grudem: President Trump has made wise decisions […]

In the form of a letter from a young follower disturbed about this support for Trump, evangelical theologian Wayne Grudem once again defends his support of the president. In a piece at Town Hall, he makes his case: Grudem claims […]

Yesterday I offered some analysis of Wayne Grudem’s article defending Donald Trump and criticizing Mark Galli’s Christianity Today editorial calling for Trump’s removal from office.  You can read my post here. Today I am running a post I published on […]

In case you missed it, evangelical theologian Wayne Grudem has turned to the politically conservative website Townhall to defend Donald Trump and criticize Mark Galli’s Christianity Today editorial. Grudem begins: Galli gives six reasons why Trump should be removed, either by impeachment […]

I have written about evangelical theologian Wayne Grudem before.  During the 2016 election he was pro-Trump.  Then he had second thoughts. Now he says that he supports the building of a wall on the US-Mexico border because biblical cities had […]

I am guessing a lot of my readers have never heard of Wayne Grudem.  He is an evangelical theologian and the author of a very popular one-volume treatment of evangelical systematic theology. He is also well-known within evangelical circles for […]

Today at The Atlantic, Peter Wehner writes “when faith is treated as an instrumentality , it’s bad for politics and worse for the Christian witness.”  Anyone who reads this blog, or has read Believe Me: The Evangelical Road to Donald Trump, knows that […] 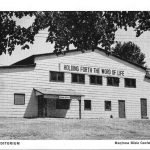 What is happening in Evangelicalland? Is Trevor Lawrence the next big evangelical Christian sports star? (On a side note, Tim Tebow is trying out for Lawrence’s new team). Asian-American evangelicals speak-up. Today’s blast from the past comes courtesy of Brantley […]

Trump’s favorite evangelicals are making their closing arguments. Here are some of them: Franklin Graham believes that God works through the United States Supreme Court. It is also worth noting that he is bragging here about attending a super-spreader event: […]

I wish John Piper would have come out earlier with this post. (SEE UPDATE BELOW). If I read him correctly, it sounds like he will not vote for Trump or Biden. Here is a taste: In fact, I think it […]

Earlier this month we did a post about Trump allegedly calling evangelical beliefs “bulls–t.” Many court evangelicals rejected this story because it came from former Trump fixer Michael Cohen, a convicted criminal. But now, thanks to the reporting of McKay […]

Here are the most popular posts of the last week at The Way of Improvement Leads Home: Michael Cohen alleges that Trump called evangelical beliefs “bulls–t.” Peter Hitchens vs. First Things on COVID-19 and free speech Theologian Miroslav Volf on […]

Here are the most popular posts of the last week at The Way of Improvement Leads Home: Court evangelical: Kamala Harris has a “Jezebel spirit” and is a satanic “chameleon” secretly working as an “Obama surrogate” An evangelical reader grieves […]

Here are the most popular posts of the last week at The Way of Improvement Leads Home: Why did Liberty University president Jerry Falwell Jr. post a picture of himself with his pants unbuckled, underwear showing, a glass of “wine” […]

Here is court evangelical and newly appointed Falkirk Fellow at Liberty University: Karen Swallow Prior, as some of you know, is an English professor at Liberty University, at least until she leaves for Southeastern Baptist Theological Seminary this summer. Metaxas’s […]

GOP political operative Ralph Reed recently appeared on the Eric Metaxas Show. Watch: [youtube https://www.youtube.com/watch?v=9cPB72BA9s0&w=560&h=315] Thoughts: 2:45ff:  The interview begins with a discussion of the quarantine. Reed seems to be making a case that coronavirus deaths and the shut-down of […]

Last week, during an event called the Q 2020 Virtual Summit, evangelical writers David French and Eric Metaxas had a conversation with host Gabe Lyons about evangelical support for Donald Trump.   I let this transcript sit for a few days now.  It is now time for […]

Sarah Pulliam Bailey’s recent story at The Washington Post adds to what I posted about  earlier this week (here and here).  Here are some new things we learn from her piece:  Mohler’s son-in-law is a Trump appointee in the State Department. […]