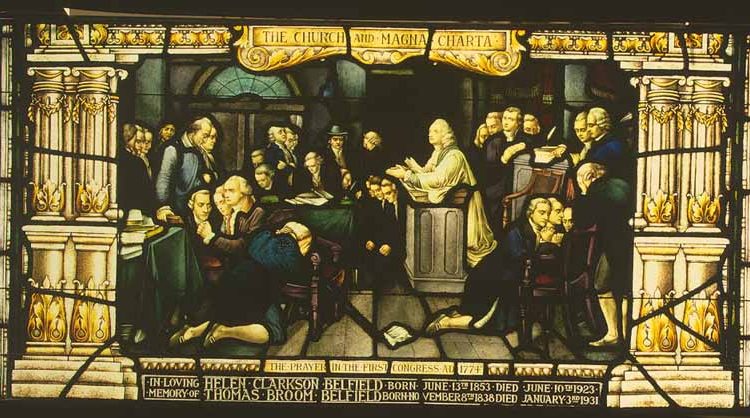 John Randolph of Roanoke (1773–1833) had no confidence that America was, or ever had been, a Christian republic.

Six months after the close of the War of 1812 — a war that he had violently opposed — Randolph wrote to Henry Middleton Rutledge that Virginia was “the most ungodly country on the face of the earth, where the Gospel has ever been preached.” And it was, as far as Randolph could see, as much “the case elsewhere in the U.S. . . .” The blame for this could be easily assigned: the influence of the Enlightenment and Enlightenment “infidelity.” His generation had been “a generation of free thinkers, disciples of Hume & Voltaire & Bolingbroke, & there were very few persons, my dear Rutledge, of our years who have not received their first impressions from the same die.”

Randolph’s unhappiness will come as a surprise to many Christians who have assumed that the United States was founded as a “Christian nation,” or that Judeo-Christian values played a prominent role in its early life, or that — explicitly or implicitly — Christianity deserves to be recognized as having a special status in the foundations of American life and law. The conviction that an American civil religion exists, and is founded on Christianity, has been fed by images of Washington kneeling in the snows at Valley Forge to pray, by the so-called “black-coat regiment” of chaplains exhorting Revolutionary soldiers to battle against the unholy armies of King George, and by the appeal of the Declaration of Independence to “Nature and Nature’s God” and the “Creator” who has fashioned everyone with the rights to life, liberty, and the pursuit of happiness. But Rutledge was not merely playing the curmudgeon. Lyman Beecher (1775–1863), who entered Yale College in the 1790s, found — in the heart of old Puritan Connecticut — that “the college church was almost extinct. Most of the students were skeptical, and rowdies were plenty. Wine and liquors were kept in many rooms; intemperance, profanity, gambling, and licentiousness were common. . . . Most of the class before me were infidels, and called each other Voltaire, Rousseau, D’Alembert, etc., etc.”

Ashbel Green, who attended Princeton in the 1780s, also found that “open and avowed infidelity” was the order of the day, and “produced incalculable injury to religion and morals throughout our whole country; and its effect on the minds of young men who valued themselves on their genius, and were fond of novel speculations, was the greatest of all.”

But it was more than just the Enlightenment that dislocated American priorities at the birth of the republic. It was also the idea of a republic itself. To the extent that the Enlightenment banished all notions of hierarchy from the physical universe, it likewise banished all ideas of hierarchical government, and with it all the apparatus associated with such government, including religion. With no need for a monarchy, a republic based itself entirely upon human longings, human morals, and human consent — not divine ones. Fisher Ames, a Massachusetts congressman, was disgusted by the secular optimism of republican ideas, since they encouraged “the dreams of all the philosophers who think the people angels, rulers devils,” and that “man is a perfectible animal, and all governments are obstacles to his apotheosis. This nonsense is inhaled with every breath.”

Nor is there any reliable evidence that Washington knelt in the snows of Valley Forge to pray. To the contrary, Washington never mentioned the name of Jesus Christ once in all his voluminous correspondence, and referred to God as a more-or-less providential force who more-or-less made events happen from a distance. John Adams snarled at the Christian doctrine of the Trinity as an affront to republican reason and caricatured the incarnation as the belief that “that great principle, which has produced this boundless Universe . . . came down to this little ball, to be spit-upon by Jews; and untill this awful blasphemy is got rid of, there never will be any liberal science in the world.” And even though Thomas Jefferson appealed to a “Creator” in the Declaration of Independence, the term Creator was as specific as Jefferson cared to get on the subject. More significantly, the federal Constitution banned the imposition of any “religious Test” for holding national office (article 6), and made no reference to a God or a Creator at all. “That very constitution which the singular goodness of God enabled us to establish,” complained John Monck Mason, the Presbyterian pastor and provost of Columbia College, “does not so much as recognize his being! . . . Even the savages whom we despise” set “a better example.” When Alexander Hamilton was asked about this omission years later, his reply was the perfect echo of John Randolph’s estimate of Virginia: “I declare,” said Hamilton to Princeton’s Samuel Miller, “we forgot.” Or maybe worse. When the aged Benjamin Franklin exhorted the Constitutional Convention to open their sessions with prayer, his motion was met with a polite refusal, since the public might conclude that a call to prayer signaled that the Convention was in so much peril that it had no hope apart from divine intervention, and “the alarm” such a suggestion would arouse would “be as likely to do good as ill.”