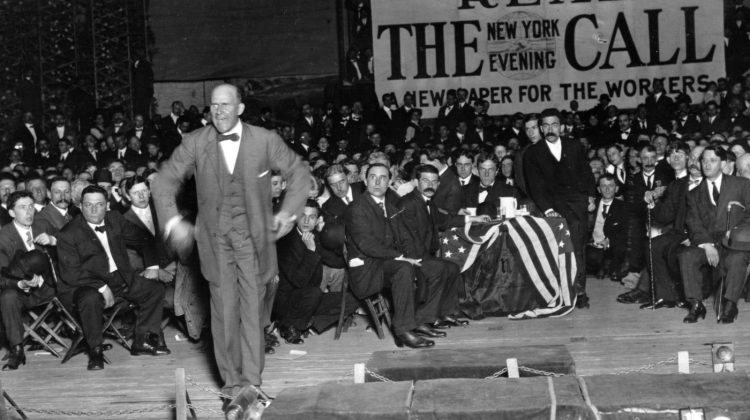 “America will never be a socialist country,” declared Donald Trump in his 2019 State of the Union Address, given to a joint session of Congress. The president clearly believed that fear of such a radical transformation would help him win reelection against a Democratic Party in which socialists like Bernie Sanders were growing in numbers and influence.

The former president and most of his political allies are probably unaware that nearly two centuries earlier, a wealthy socialist from abroad spoke before the same body. The friendly reception he received suggests that the philosophy of economic equality and cooperation instead of competition may not be “un-American” at all.

During the winter of 1825, Robert Owen, a rich manufacturer from Wales, gave two addresses, each about three hours long, to joint sessions of Congress. There was, he told the lawmakers, an urgent need to establish “a New System of Society,” one that would be based “upon principles of strict justice and impartial kindness.” Owen condemned the reigning economic order, which he called “the trading system,” as selfish and inhumane at its core. It trained people “to obtain advantages over others,” he argued, and gave “a very injurious surplus of wealth and power to the few” while exacting “poverty and subjection on the many.”

Owen predicted the coming of a new order that would liberate Americans from their plight. An economy organized for “mutual benefit” would enable men and women to leave the irrationality of relentless, often violent, competition behind them. “In the new system,” he promised, “union and cooperation will supersede individual interest.”

The legislators treated Owen and his ideas with great respect. Several Supreme Court justices came to hear him; so did the outgoing president, James Monroe, and the incoming president, John Quincy Adams. Because neither Thomas Jefferson nor James Madison, who were then quite elderly, could leave their Virginia estates, Owen brought his message to them. He paid a visit to John Adams up in Massachusetts as well.

Every living president at the time was thus willing to hear the visionary radical’s  sharp critique of the capitalist society emerging both in the United States and across the Atlantic. Their curiosity was a sign that the market system, for all its promise of plenty, was not yet a settled reality defended by all men of wealth and standing.

Robert Owen soon gave a name to the new system he advocated. He called it “socialism,” and the term quickly caught on across the globe. Although future socialists would never enjoy such an elite audience in the United States, their ideas and the movements they built remained part of the mainstream of American history. Most have been committed to democracy, both as an electoral system and as the vision of a future in which ordinary people, in all their diversity, would make the key decisions in their workplaces and communities, as well as at the polling booth, that affected their lives and the fate of their society.

Like it or not, socialism has been as impossible to separate from the narrative of the nation’s history as the capitalist economy itself—and often posed the most prominent alternative to it. Socialists were also energetic advocates of federal and state policies such as Social Security, on which most Americans have come to rely.