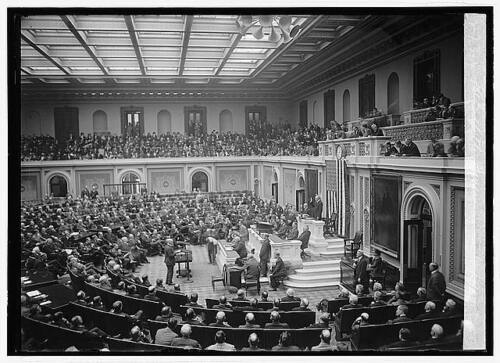 The House of Representatives just adjourned for the day. It did not choose a speaker. Hakeem Jeffries won on the first ballot. Jeffries also won on the second ballot and third ballot.

The last time a Speaker of the House vote extended for more than one ballot was 1923–the 68th Congress. In the 1922 midterm elections the GOP lost a significant number of seats in the House, but still held a 225-207 lead over the Democrats. As a result, GOP progressives gained more power in the caucus. This group was willing to work with Democrats to change House rules with the goal of breaking the stranglehold conservative Republicans had over the committees. This would make it easier for bills to get to the floor for a vote.

On the first vote, Massachusetts representative Frederick Gillett, the incumbent Speaker of the House, won 190 votes, but 24 progressive Republicans voted for other candidates, with Henry Cooper of Wisconsin receiving the most votes from this faction. The conservatives who supported Gillett refused to give-in to the progressive wing’s demands and the progressives would not budge. (The Democrats threw their support behind Finis J. Garrett of Tennessee). Eventually, a compromise was reached.

Here are political scientists Jeffrey A. Jenkins and Charles Stewart III from their book Fighting for the Speakership: The House and the Rise of Party Government:

The progressive Republicans demanded a revision of the House rules in order to distribute power in the chamber more evenly, and announced they would vote against Gillett unless they were provided with assurances to that end….Nicholas Longworth (Ohio), the Republican majority leader, responded that he was unwilling to compromise with the “insurgents. Thus, an intraparty state down occurred as the House was set to convene.

The progressives refused to blink. When the 68th Congress opened on December 3, 1923, they broke from the regular Republicans and prevented the organization of the House. Four separate speakership ballots were held, with no election…Twenty progressive Republicans, joined by two members of the Farmer-Labor Party, opposed Gillett; 17 votes were distributed to Henry Cooper and 5 to Martin Madden…. Gillett and Finis J. Garrett (D-Tenn) ran virtually neck and neck, each about 10 to 12 votes short of victory. Without a quick resolution in sight, Longworth moved an adjournment until the following day. The progressive Republicans reiterated their call for rules reforms that evening, but Longworth and his allies would make no concessions, and argued that public opinion would support their position and force the progressives to yield….

Longworth underestimates the progressives’ resolve. The House met again on December 4, held four additional ballot, and still no Speaker was chosen. The 20 progressive Republicans held firm behind Cooper and Madden, and Gillet made no gains. After the fourth ballot of the day (eighth overall), Longworth moved for an adjournment and reversed his position. He offered the progressives a compromise: the rules from the previous House would be adopted for one month, during which time members could debate rules changes on the floor. After such debate, the House could then adopt any rules changes favored by a majority of the members. Progressive leaders were receptive, and a deal between them and Longworth was hashed out in a conference that evening….The following day, Gillett was elected on the first ballot (ninth overall), with 215 votes to 197 for Garrett and 2 for Madden. Eighteen of the 20 progressive Republicans swung their support for Gillett, which provided him with the margin of victory.

There are some analogies between 1923 and 2023–the most prominent is that a wing of the GOP held the election hostage until it got the reforms it wanted. What is interesting about 2023, however, is that McCarthy gave all kinds of concessions to the opposition before the vote. He even offered to change a rule that would allow five members of the House to offer a resolution to remove the speaker, a concession that would have weakened his speakership.

The fourth vote is scheduled for tomorrow at noon. I think it’s going to be a long night for Republicans. Stay tuned for my next post.