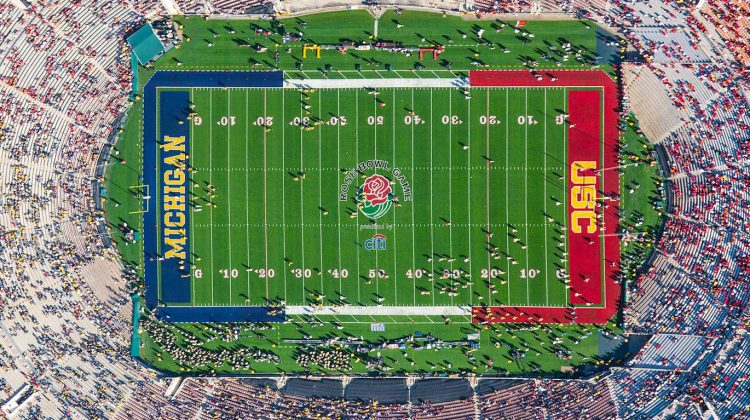 According to California writer Joe Mathews, the Rose Bowl football game is dead. It died from “two chronic diseases–greed and our winner-take-all culture.” Here is a taste of Mathews’s piece at Zocalo:

But the Rose Bowl itself—a post-season football game pitting top teams from the West (Pac-12) and East (Big 10)—is no more. Ever-changing California has lost a rare and reassuringly stable New Year’s tradition.

The Rose Bowl was known as “the granddaddy of them all” because, when first played by the University of Michigan and Stanford on January 1, 1902, it was the first post-season college football bowl game.

Once considered cutting-edge—for example, the game was the occasion for the first transcontinental radio broadcast of a sporting event—the Rose Bowl came to represent values so old-fashioned that they now seem counter-cultural, even foreign, in our angry and nationalist age.

Today, Americans are bitterly divided by politics, region, and various forms of identity. To make things worse, our systems, in everything from education to business to politics, spread division through competitions that identify an uber-winner, making everyone else a loser.

The Rose Bowl incubated a different tradition, inspiring the creation of college football bowl games that brought together Americans from different regions. This system of bowls, headlined by the Rose Bowl, formed a college football system that produced many winners, rather than just one.

Champions of the Rose Bowl, the Sugar Bowl, the Orange Bowl and so on, each of which could claim their own share of a mythical national championship. It was like one of those Scandinavian elections, where four or five parties emerge as winners, and take seats in a coalition government.

But such a unifying and democratic-minded spirit couldn’t survive long in our cutthroat country.

The Rose Bowl and other bowls resisted a playoff for decades. But in the 21st century, the pressure for a playoff—from university teams, TV networks, and sports journalists—grew. The leading American politician of this century, Barack Obama, even campaigned on a football playoff, making a “winner-should-take-all” argument: “If you’ve got a bunch of teams who play throughout the season, and many of them have one loss or two losses, there’s no clear decisive winner.”