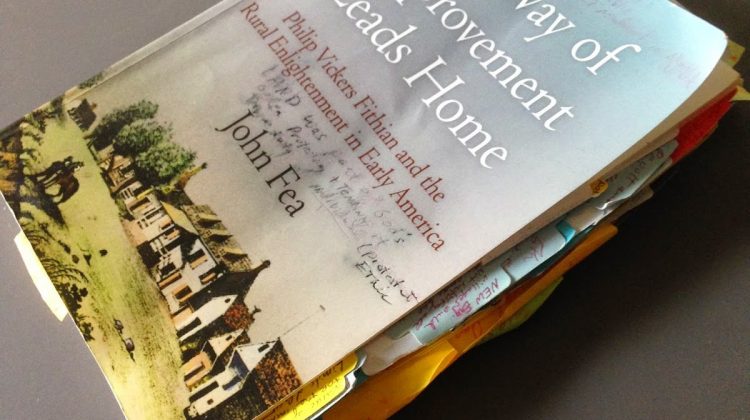 This weekend my daughter and her boyfriend came to visit for Thanksgiving. It was his first visit to our stately abode in south central Pennsylvania and during the course of his stay she decided to show him my basement office. As we were talking he picked-up a copy of my book The Way of Improvement Leads Home: Philip Vickers Fithian and the Rural Enlightenment in Early America and started reading the dustjacket and the back matter. “How does this work,” he asked, “I mean where did you find Fithian’s diary and how did you read it?” Needless to say, I was happy to answer his question! I told him about how I first learned of the journals of Philip Vickers Fithian and why I thought I wanted to write a book about him based on my readings of these private writings. We talked a bit about my experience reading the journals in Princeton’s Firestone Library. About an hour later my daughter came down and asked me if I had an extra copy of The Way of Improvement Leads Home that I could give to her boyfriend. He wanted to read it. That’s how we historians do it–one convert at a time! 🙂

I love reading diaries. It is my favorite primary source genre. This is why I found Laruen Silverman’s Atlantic piece, “A Pocket-Size Time Machine,” so fascinating. Silverman tells the story of Sally MacNamara Ivey, a woman who has read more than 10,000 unpublished journals.

My diary collection is dwarfed by Sally MacNamara Ivey’s. She has read more than 10,000 unpublished diaries and spent 35 years collecting them. She keeps nearly 1,000 in her Washington State home. With her blue-rimmed librarian glasses and wavy golden hair, she’s part archivist and part romantic, on a mission to sort, catalog, and find a forever home for all of her diaries. They’re tucked away in plastic bins in each of her closets, stacked on nightstands, and stored securely in six-foot-tall, 1,000-pound safes in her garage. “If someone robs me,” she told me, “they’re going to be very disappointed.”

Whenever MacNamara Ivey has had pocket change, it’s gone to purchasing diaries. Back in the late ’90s, when she and her husband were raising four kids with the money she brought in waiting tables and he made working at the local mill, she bought a diary on layaway for $500 (about $900 today). It was written by a woman who attended the 1893 Chicago World’s Fair. In exquisite detail, the author described the exotic events, including the devastating fire that erupted in a cold-storage building nicknamed the “Greatest Refrigerator on Earth” and the wonders of this new thing called electricity.