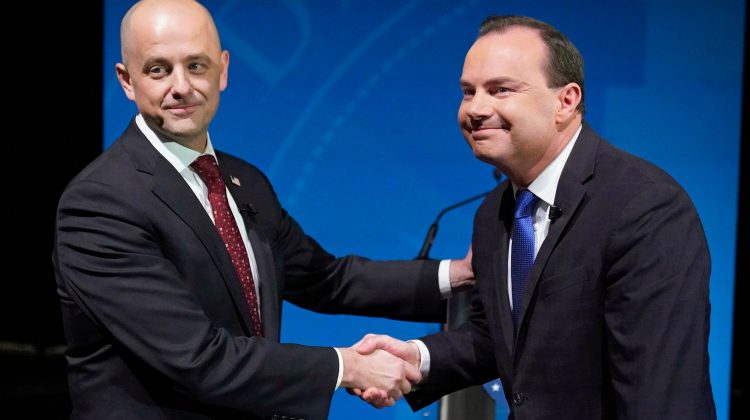 In Utah, incumbent GOP Senator Mike Lee is running against conservative and 2016 presidential candidate Evan McMullin. The Utah Democratic Party is not running a candidate in this election and is encouraging members to back McMullin.

Over at Religion News Service, Jana Riess offers some analysis:

“Could Republicans lose a Senate race in deep-red Utah?” CNN asked recently. The Washington Post wrote of “the intriguing Evan McMullin scenario,” in which Evan McMullin could provide the tie-breaking vote in the gridlocked Senate if he, as an independent, were elected next month to represent Utah.

The headlines and the poll results show a tight race, with neither candidate holding a majority. According to the pollwatchers at FiveThirtyEight, there’s only one survey since August that shows Republican incumbent Senator Mike Lee with more than a 50% share of the vote, and it was barely that — just 51%.

So McMullin has everything to play for, despite the long odds against an independent candidate in these highly partisan times. Some of the polls show him trailing within the margin of error, meaning it could possibly happen if all of the stars align, the moon is in the seventh house and my lucky rabbit foot is on its game.

For an incumbent GOP senator to lose an election in one of the nation’s rubiest states is certainly a long shot, at least according to the rules of politics as usual. But even the way the campaign has been run so far has shown that things aren’t politics as usual.

That started months ago, when in a surprise move, the state’s small core of Democrats decided to do something radical — which was to not field their own Democratic candidate for the Senate race. Instead of sending their usual sacrificial lamb to the November general election for slaughter — Utah hasn’t elected a Democrat to the Senate in over half a century — the Democrats decided to pool their support behind independent conservative candidate Evan McMullin.

It was a shockingly pragmatic move in our age of ideological extremism. The Democrats realized their old methods were just going to result in the re-election of former President Donald Trump’s sycophant Mike Lee, so they changed it up. Mike Lee is now scrambling and on the defensive — begging, for example, for fellow GOP Utah Senator Mitt Romney to publicly endorse his candidacy, which Romney has so far declined to do. (Turnabout is fair play: Lee refused to endorse Romney when he was up for re-election in 2018. It’s funny how karma works.)

Romney has been a consistent Trump critic since the very beginning, as has Evan McMullin, who ran for president in 2016 as a protest candidate for disenchanted Republicans who saw the dangers in Trump.

Lee, by contrast, started out by criticizing Trump back when the “Access Hollywood” tapes were leaked in 2016 but then fell behind the demagogue in a big way. By the fall of 2020, when Trump was stumping for re-election in Arizona, Lee was comparing him favorably to Captain Moroni from the Book of Mormon.

It was a humiliating and idolatrous moment for Latter-day Saints the world over to see a scriptural hero who risked his life for his people compared to an adulterous, lying, narcissistic bully. Lee even claimed with a straight face that Trump “seeks not the praise of the world.”

Considering that Captain Moroni was determined to resist authoritarian leadership and would-be kings like Donald Trump — the kind who are ready to lie to the people and throw out the results of a fair and democratic election just to keep themselves in power — the irony of Lee’s comparison is palpable.