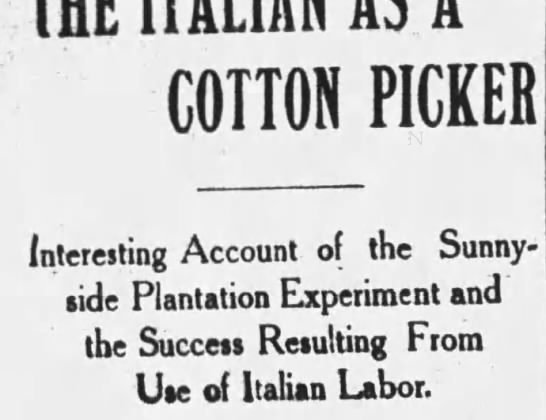 Writer Brad Ricca tells the story of the Italian immigrants of Sunnyside Plantation in Arkansas. Here is a taste of his piece at The Washington Post:

In the early 1900s, a small travel agency in Greenville, Miss., began sending representatives to Italy. The dozen or so agents canvassed the arid farms and barber shops of the Abruzzo region, smiling as they passed out brochures reading, “Italians! Do not lose this great opportunity to buy tickets from me . . . for the steamer Manilla . . . for $45.30 with railroad fare paid.” The agents were selling passage to America, with the promise of jobs on arrival at a farm called Sunnyside.

But few of the Italians had the money to buy the ticket. The agents assured them they could pay it back over time. They added that every morning, the company that oversaw Sunnyside would hang a piece of fresh meat from their doorknob. For many Italians, struggling with bad land and an unstable economy, this opportunity for a new start was not only enticing, but potentially lifesaving.

The painful saga that followed – one of deceit and shattered dreams – would continue to have echoes in U.S. history, in the “Reverse Freedom Rides” orchestrated by Southern white segregationists in the 1960s and most recently in Florida Gov. Ron DeSantis’s (R) ploy to send migrants to Martha’s Vineyard.

But the Italians saw only opportunity when the agents from Mississippi produced an employment contract and asked them to sign. Many did. Though the brochures were written in Italian, the contracts were not. Most or all of those signing had no idea what the language meant.

The agents then handed the people a smaller piece of rolled-up paper and asked them not to mention the agreement to the officials at the Port of New Orleans. They were to memorize the words on the paper, stating that no one else had paid for their journey.

The voyage was long. On arrival, the Italians remembered their promise. After a final look, they threw the little scrolls into the sea and repeated their message.

They were then taken up the Mississippi River and onto a small steam train, which brought them to Sunnyside. It was sunny, as promised, and hotter than Italy. They were in Arkansas, alongside the Mississippi, on a peninsula jutting into Lake Chicot, which cut them off from the rest of the land.

When they got to their ramshackle cabins by the cotton fields, the version of the story they had been told in Italy began to unravel.