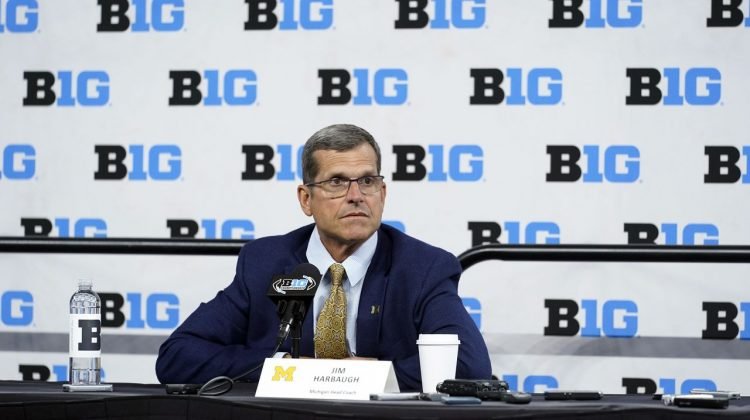 Last week we did a post on the University of Michigan football coach’s speech at a pro-life event sponsored by Michigan Catholics. In the days since that speech, Harbaugh has elaborated on his pro-life views. Here is ESPN:

Michigan football coach Jim Harbaugh, who last week spoke at a pro-life fundraising event in Michigan, said this past weekend that “we’ll raise that baby” should someone in his family or program be involved with an unplanned pregnancy.

“Let’s discuss it,” Harbaugh told ESPN’s Gene Wojciechowski as part of a wide-ranging interview conducted Saturday in Muskegon, Michigan, during the team’s summer tour of the state, adding: “I’ve told [them] the same thing I tell my kids, boys, the girls, same thing I tell our players, our staff members. I encourage them if they have a pregnancy that wasn’t planned, to go through with it, go through with it. Let that unborn child be born, and if at that time, you don’t feel like you can care for it, you don’t have the means or the wherewithal, then Sarah and I will take that baby.”

Jim Harbaugh has taken a more public stance on social issues in recent years. He has voiced strong support for Colin Kaepernick, whom he coached with the San Francisco 49ers and made an honorary captain at Michigan’s spring game earlier this year. And he spoke out after the murder of George Floyd in 2020, tweeting that justice must be “equal and fair for all” and attending an anti-police brutality march in Ann Arbor a week after the killing.

“I believe in having the courage to let the unborn be born,” Harbaugh said at the event last week, according to Detroit Catholic, the news service for the Roman Catholic Archdiocese of Detroit. “I love life. I believe in having a loving care and respect for life and death. My faith and my science are what drive these beliefs in me.”

Harbaugh is a practicing Catholic. His team went on a tour of Italy in 2017, which included a visit to the Vatican.

Asked by ESPN about his comments at the event, Harbaugh said: “Faith, family, football … those are my priorities. I just think that … the abortion issue is one that’s so big that it needs to be talked about. It needs serious conversation. What do you think? What do I think? What do others think?”

He added: “It’s a life-or-death type of issue. And I believe in, and I respect, people’s views. But let’s hear them. Let’s discuss them because there’s passion on both sides of this issue. So when you combine that with respect, that’s when the best results come. … [I’m] just contributing to that conversation and that communication, which I think is really important, in my opinion.”